Love and Math: The Heart of Hidden Reality 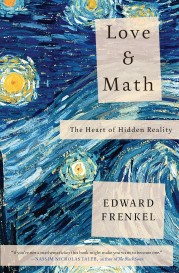 Love and Math: The Heart of Hidden Reality

There’s a stereotype of the mathematician, remote and otherworldly, that put off the romantic young Edward Frenkel, who didn’t think he fit the mould. Frenkel loved to paint and read novels and play ball outdoors. To boot, he hated doing high school math in the small town where he was raised in pre-perestroika Russia. Had it not been for a family friend intervening and showing him that math was more than just crunching numbers—in fact, a math formula had led to the discovery of quarks (so named for a poem in James Joyce’s Finnegan’s Wake)—Frenkel would have missed his calling. “I thought it was really cool that a physicist would name a particle after a novel,” he enthuses in his new memoir.

Frenkel’s story is unusual. In 1984, anti-Semites barred him from entering Russia’s top math university, Mekh-Mat. He was forced to enrol at the academically inferior Institute of Oil and Gas, which didn’t offer the pure math courses he sought. To get what he wanted, he scaled the fence of Mekh-Mat, illicitly sitting in on lectures given by a sympathetic professor.

The solving of his first big math problem was as memorable as a first kiss. “If you experience this feeling once, you will want to go back and do it again.” He began to publish his findings and, before long, received a fellowship from Harvard in a letter addressing him as “doctor,” though he had not yet received his bachelor’s degree.
Frenkel stayed on in the U.S., learning pop culture from TV’s David Letterman. His own mischievous sense of humour comes across delightfully on the page. “Besides Harvard,” he writes, “there is another lesser known school in Cambridge, usually referred to by an abbreviation of its name?.?.?.?MIT. I am kidding, of course! There has always been a bit of a rivalry between Harvard and MIT.”

Now a math professor, Frenkel teaches students that pure math can unlock great mysteries without the need for costly technologies. He likes to tell the story of when Einstein’s wife heard that a telescope was needed to determine the shape of space-time, and she said, “Oh, my husband does this on the back of an envelope.”