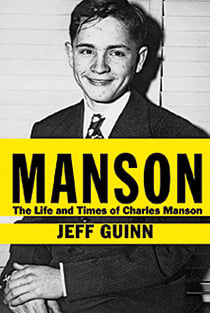 Manson: The Life And Times Of Charles Manson

There have been a lot of bad Charles Manson books, and one great one, written by Manson’s prosecutor: Vincent Bugliosi’s 1974 Helter Skelter, history’s top-selling true-crime book. It is probably the right time for another try, and Jeff Guinn’s new account adds to our image of the L.A. crime spree that sounded the death knell of the ’60s. For starters, by taking a biographical approach, it detaches Manson somewhat from that context, showing how the Depression and the Second World War helped in various ways to form him.

There are few surprises in Manson’s upbringing, detailed carefully here with family interviews for the first time. His single mother did some prison time early in his life and could not keep him out of juvenile reformatories practically designed to turn him into a con artist. This involved alternate helpings of prison rape and trendy self-help literature; Guinn documents Manson’s controversial, but relevant, participation in Scientology and Dale Carnegie seminars. Manson, it is important to remember, is not known to have killed anybody personally. His ability to impress and dominate people, refined by years of literally surviving on his wits, hit California like a weaponized bacillus.

Guinn’s version corrects the most important weakness of Helter Skelter by revealing just how close Manson and Beach Boy Dennis Wilson became. Bugliosi left music-industry people out of his book almost completely, but here, the Manson murders come off almost as an out-of-control end result of Charlie’s pursuit of a recording career. He came so close (Neil Young praised his guitar-improvisation skills) that one can almost imagine an alternative history in which the Charles Milles Manson of 2013 is a minor ’70s pop star and beloved hippie eccentric, instead of a wretched old murderer dying slowly in jail. Guinn’s Manson does not make for as good a book as Helter Skelter, but it might be a better primer for younger readers on one of the 20th century’s defining criminal cases.