Margaret Atwood recasts The Tempest inside a prison

Margaret Atwood on her contribution to the Hogarth Shakespeare project

Director Felix Phillips, the protagonist of Margaret Atwood’s Hag-Seed, is on top of Canada’s theatrical world when the novel opens. But his spendthrift and drama-queen ways, including a Macbeth production featuring chainsaws, have irritated his government and corporate masters, leaving him vulnerable to a coup plotted by his treacherous deputy. Distracted by grief at the deaths of his wife and daughter, and his Trump-sized self-absorption—“I did make him a kind of a lunatic and control freak,” Atwood cheerfully allows—Felix never sees his downfall coming.

Soon fired as artistic director of a lightly disguised Stratford Festival—very lightly, given his surname is a nod to former Stratford director Robin Phillips—Felix flees to self-exile in a hermit-like cell in the truOntario countryside. There, he settles down to a prolonged stint of communing with his late daughter, Miranda. He broods on his injuries until, 12 years later, fortune offers a chance for revenge.

If it all sounds familiar, it’s supposed to. Hag-Seed is Atwood’s take on The Tempest, and her entry in the Hogarth Shakespeare project—celebrated authors “reimagining” the Bard’s plays in novel form. Wildly funny and inventive, Hag-Seed is full of the “equivalencies” Atwood so admires in The Gap in Time, Jeanette Winterson’s 2015 version of The Winter’s Tale. Faced with a character who perishes in one of literature’s most famous stage directions, “Exit, pursued by a bear,” Winterson has her Antigones chased to his death by more urban predators, a carload of thugs. Shakespeare’s Leontes, a king without a care for others’ lives, became Winterson’s Leo, a Gordon Gekko-like hedge-fund manager.

On one level, it’s much the same in Atwood’s hands. If Prospero, the philosopher king of his island prison in The Tempest, pulls the strings that control everyone else marooned on his rock, Hag-Seed’s Felix does that sort of thing for a living. While Prospero has Ariel, captive sprite and nonpareil special effects guy, to do his bidding, his successor has 8Handz, a computer hacker of genius, if not sufficient cunning to avoid incarceration in Fletcher Correctional Institute, where Felix ends up teaching drama. An “auspicious star” lured Prospero’s enemies within his reach; Felix has the unwitting help of a senator’s granddaughter, Estelle. Even the sketchy farm family who provide Felix’s hidey-hole resemble Prospero’s crew of useful “lesser elementals.”

Atwood does Winterson one better: the characters in Hag-Seed are already living The Tempest, albeit unknowingly, when Felix decides to stage the play, with himself in the lead, in the peculiar confines of the prison.

But the clever equivalencies, even Atwood’s hall-of-mirrors version, are not the only reason The Gap in Time, the first of the Hogarth Shakespeare project and Hag-Seed, the fourth and newest, are the most compelling of the series so far. Both writers have a fascination with their subject plays, rising almost to a four-decade-old obsession with Winterson, 56—The Winter’s Tale is, among many other things, the story of a foundling, which Winterson was. Atwood didn’t have to do any thinking either when she was invited to take part in the project. “It was The Tempest right off,” says the novelist. “I’ve already written about Prospero and other uncertain magician figures in literature—the Wizard of Oz, Mephisto—and their double natures: artist side, dubious side.”

The two plays in question are also, in a phrase, ascending Shakespeare. Some part of the playwright’s oeuvre always speaks with fresh urgency to the English-speaking world; which plays resonate most at any moment is determined by current fixations and anxieties. Today, the stars are the history plays—reflecting the unsettled international situation—and the late romances, a grouping which includes The Winter’s Tale and The Tempest. Broken families and last hopes for second chances, some requiring fixes as impossible as a statue coming to life, are the essence of those plays and the root of their profound appeal in a world full of aging Baby Boomers.

Related: Margaret Atwood on free will, safety and modern romance

Winterson’s intense love for her play’s hint of redemptive possibilities is palpable in The Gap in Time. For Atwood, however, Shakespeare’s unanswered questions in The Tempest are more of an intellectual and artistic conundrum. There are so many of them, including the idea of redemption. “In the late plays there are people who have done terrible things, been total s–ts, who get forgiven, so… What’s that about?” she asks. The Tempest also has one of the two big, open-ended motivation moments in Shakespeare, Atwood says. “There’s Iago being asked ‘Why?’ and saying nothing, and there’s Prospero forgiving his brother Antonio, with Antonio replying nothing at all. So the question there is: If you were Prospero, why would you get on a boat with this guy after throwing down all your weapons?”

That’s a query more Atwoodian in its mockery than Shakespearean, of course, and if the playwright abandons Prospero’s decision and its potential consequences to a (presumed) off-stage happy ending, it’s no surprise the novelist does not. Felix’s cast of prisoners, who are required to complete their drama studies by crafting projected afterlives for the characters they portray, ponder the matter closely. They conclude the same blind narcissism that marooned Prospero 12 years before was at work again; this time around—in the judgment of convicted inmates very familiar with bad outcomes—the results for the mage will be far worse.

It was “natural,” says Atwood, to set in a jail her novelization of a play obsessed with prison, real and metaphorical, right down to its last words, “Set me free,” the conclusion to “the weirdest epilogue in all of Shakespeare,” in which Prospero asks the audience to liberate him from the prison of the play. And natural also for the novel to utilize the insights, however tinged with cynicism, of those aware all along of being caged. But by Hag-Seed’s conclusion, even Felix, not much given to looking past his own nose, is aware The Tempest—and his own story—are as much about imprisonment and release as they are about revenge.

Just ask Miranda: any of them. Prospero’s daughter and Felix’s child, dead of meningitis at three, share the same name. Atwood skilfully keeps Felix’s “raising” of his girl, on the believable side of not-quite psychosis, his comfortable familiarity with her spectral presence as she grows through her school years occasionally jolts even Felix and is one of the motivations that sends him back out in the world, to Fletcher Correctional. But dead Miranda becomes ever more alive when Shakespeare’s Miranda enters the picture and the revenge plot approaches its climax. 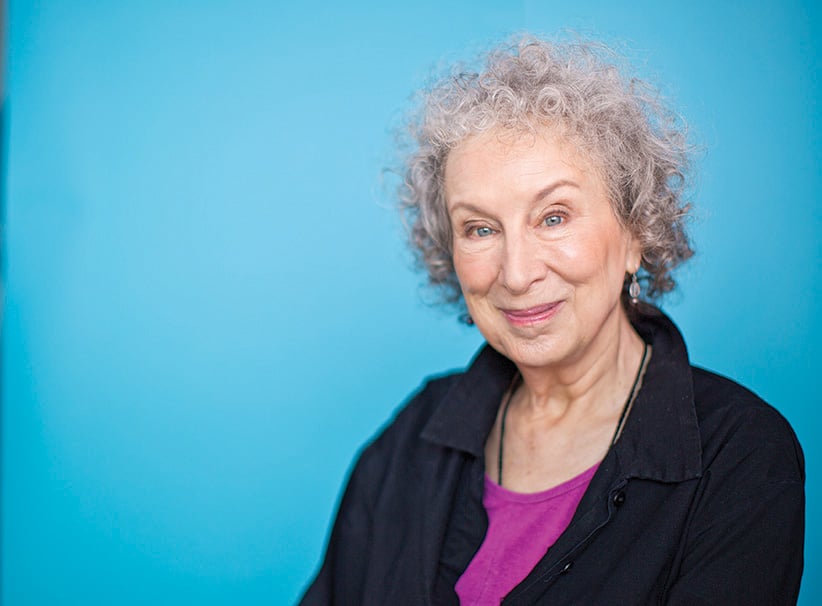 With his players hesitant enough to take on the role of Ariel, the sprite, because of the possible fatal reputational risks inside a prison of playing a “fairy” character, Felix has to recast Ariel as a kind of space alien, which makes him cool in the inmates’ imagination. For the role of Miranda, though, the director has to hire an outside actress. She begins to exert influence in unexpected ways—just as dead Miranda begins disturbing her father by identifying with Ariel, because, Atwood says, “they are both in thrall” to Prospero/Felix.

Atwood positively revels in the ambiguities surrounding the character of Caliban, the (sort of) human son of the witch Sycorax, and the only other inhabitant of the island. Prospero may seem the star of the show, but Atwood, or at least her title, begs to differ: Caliban is the seed of the hag. Felix certainly thinks the play is about Prospero—that is, about him and his own just revenge—but Atwood points out none of his cast agree. “They all want to play Caliban. Any director staging the play has to answer the question of what to do with him. Is he victim of colonial repression, the id unleashed, what? And what happened to him?” Instinctively adhering to the colonial reading, the sympathetic prisoners express fear for Caliban in their afterlife sketches, once he’s been dragged off his native island and taken to Europe: “He’s never been vaccinated, right?”

Like playwright and novelist, though, the inmates too are in a mood for second chances. They decide to take literally Prospero’s most famous words, “This thing of darkness I acknowledge mine.” It’s “a chilling line,” says Atwood, “one that just causes your hair to stand up.” The prisoners themselves seem a little unsure of their claim that Prospero is Caliban’s biological father, but are rightly more confident about the pair’s moral kinship. One way or another, they feel, Caliban is child to Prospero—who proceeds to do the right thing by him. Prospero cleans up his wayward child, teaches him manners, helps keep him off the booze, and fosters the musical talent that was apparent in The Tempest. Once he catches a break, the first of his life, Caliban soars, say the inmates. He and his band, Hag-Seed and the Things of Darkness, become world-famous.

And why not? It’s no more unlikely than a statue coming to life in The Winter’s Tale. Allow the last word to Atwood, sounding as magesterial and as untrustworthy as her mage: “I leave a variety of ending choices, second-chance possibilities for all.”