On the making of the Mary Tyler Moore Show 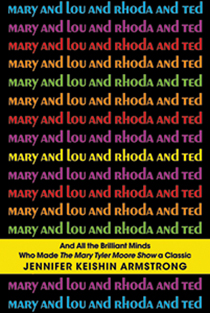 Many people have written about The Mary Tyler Moore Show, but Armstrong, a former Entertainment Weekly staff writer, is the first to put it all into a concise, readable popular history of arguably the most influential U.S. sitcom of all time. Not that it started as a sure thing. Moore was returning to TV after a disastrous attempt to become a film and theatre star. But arriving just when TV was desperate for smarter stories and younger demographics, the show wound up as one of the first to feature a woman as “a strong, independent single lead character.”

The book is told largely from the point of view of a few key people, particularly Treva Silverman, the first of several female writers hired by creators Allan Burns and James L. Brooks to provide the perspective of a modern single woman. The downside of this approach is that it sometimes neglects other key people or even whole seasons of the show after Silverman left. And Armstrong, anxious to tell a story of how the series “helped usher in a more woman-friendly era in the television industry,” treads lightly around facts that don’t fit the narrative, such as the virtual disappearance of women from the writing staff in the final three seasons.

Still, Armstrong has gathered many of the most interesting stories, including the show’s multiple brushes with cancellation in its first season. She’s at her best creating portraits of the behind-the-scenes people, particularly the young female writers like the future Saturday Night Live innovator Marilyn Suzanne Miller, who cold-called Brooks with the greeting “Hi, I’m 22, I’m in Monroeville, Penn., and I’d like to send you a script.” If Armstrong can’t quite make the case for The Mary Tyler Moore Show as a feminist work, she at least makes it clear how exciting it was that, for the first time, there was a show on TV in which intelligent young women could see themselves.