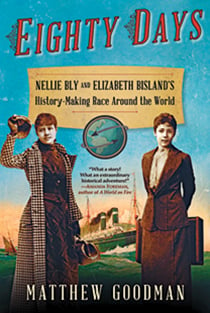 In 1889, Nellie Bly, 25, was the most prominent female journalist in New York—celebrated for having faked insanity to write an exposé of her city’s Women’s Lunatic Asylum—and about to get still more famous. On Nov. 14, at 9:40 a.m., sponsored by her newspaper, Joseph Pulitzer’s the World, Bly set out to circle the globe faster than Phileas Fogg, the hero of Jules Verne’s novel Around the World in Eighty Days. In an era of ferocious news wars, John Walker, publisher of the Cosmopolitan, reacted as soon as he read of it. Suspecting he could beat the World by sending his own young woman west, Walker press-ganged Elizabeth Bisland, his 28-year-old literary editor, on to a Chicago-bound train just eight hours after Bly set sail for England.

It’s a wonderful story, made all the more compelling by fine writing and exceptional historical detail. It was the proliferation of transportation networks like the U.S. transcontinental railroad that had inspired Verne’s 1872 novel, and the two racers took full advantage of them—and of the might of the British Empire, which guaranteed safe passage to the first great wave of globe-trotting tourists. Bly despised the British while Bisland admired them, but both wanted, like so many contemporary Americans, their country to get its place in the sun, ambitions that took the United States to world power status only a decade later in the Spanish-American War.

The two women had much else in common. Both were self-conscious feminists, gifted writers willing to take large risks to escape being stuck on the society pages. But, as Goodman writes, only Nellie Bly had an express train named after her, because she won the race. In the end it’s a tale of a very modern cult of celebrity. Vast crowds greeted Bly’s return, while few welcomed Bisland home. Taking note, the St. Albans, Vt., Daily Messenger thought that was about right: “It is the winner who wins.”

FILED UNDER: around the world book reviews Matthew Goodman