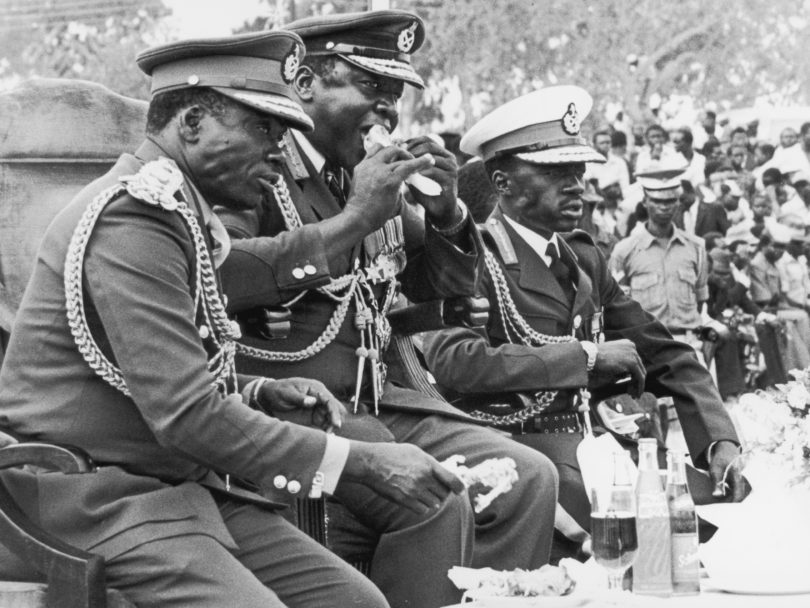 We need a new word to describe the uncomfortable hunger one feels reading this book, which combines descriptions of tantalizing dishes with portraits of the brutal eaters who ordered them. Polish writer and journalist Witold Szablowski has interviewed the chefs of Idi Amin, Fidel Castro, Enver Hoxha, Saddam Hussein and Pol Pot to produce How to Feed a Dictator, a reflection on the morality of survival (no evil happens except in the name of “necessity”), the personalities who become dictators and the personalities who serve them, who are a lot like you and me.

Dictators aren’t. But they are usually charming (we learn that Pol Pot has the exact same smile as Argentine soccer star Lionel Messi), and their success, if you want to call it that, comes from the overlap of these ordinary, admirable qualities with darker ones—particularly a devious immorality in favourable historical circumstances. It goes without saying that strongmen must have capacious, healthy stomachs, big appetites for everything from food to sex and, finally, pure power (Idi Amin demanded “only one thing,” his chef Otonde Odera told the author, which was that all his staff be circumcised). But personality cults don’t have room for gastrointestinal distress, or other weakness, so measures are taken to control what the people know, even though we somehow always find out in the end. This is what feeds our curiosity for the most private information about celebrities in general. Mocking flatulent kings or fixating on Hollywood cellulite is a time-honoured and probably universal release valve for subjects in unequal societies, allowing them to take the powerful down and to remember that rulers are also bodies, unreliable and often hungry.

If it’s always a shock to momentarily relate to people we find it easier to think of as monsters, it’s certainly novel to want to eat what they ate. Sharing food, as magicians and priests figured out a long time ago, is a potent form of communion, which is not something you probably want with Saddam Hussein. But here you are, googling lamb navarin. This atmosphere of unwelcome intimacy, combined with a dispassionate narration layered with first-person accounts by the chefs, makes this a very special book.

READ: Why COVID-19 spreads so quickly inside dictatorships

Szablowski and a network of local fixers took years to track down the chefs and convince them to tell their stories, and they fall into two categories. One is the professionals (Amin’s Odera, Hussein’s Abu Ali and Hoxha’s Mr. K), who ended up cooking for the big man because they were the best, and who all acknowledge some pride in this. The other is the believers (Castro’s Erasmo and Flores, and Pot’s Yong Moeun), who cooked for the cause. Members of the first group talk like survivors, because they are. Their families’ lives depended on their cooking (and their ability to avoid upsetting powerful members of the inner circle, principally the wives), while those in the second group remain devoted, with their capacity to think for themselves permanently atrophied. Moeun especially, who joined the Khmer Rouge—also known as Angkar—as a teen, says: “If Angkar had decided that I’d committed treason, I’d have agreed with Angkar.”

Can understanding such a person and their choices make you complicit? When he meets Moeun, Szablowski recounts, she “greets me with a firm handshake and a laugh. I haven’t said a word yet, and she’s already laughing. So I have to remind myself once again: Pol Pot, with Pol Pot, about Pol Pot, for Pol Pot, because of Pol Pot. But it’s no good, Auntie Moeun’s laughter is as infectious as polio.” Some transient property, passed from Pol Pot to Auntie Moeun to Szablowski, and now to the reader. Are these people dangerous? Is their food?

READ: Some Canadians are turning to their yards to grow their food during the COVID-19 pandemic

For most readers, not being fanatics, there will be more resonance with the narratives of the professional chefs, all of whom were simply trying to make their way in life and ended up with a particularly dicey view of 20th-century history. Several of them didn’t even know who they were cooking for the first time they were bundled into an official car and told to prepare this or that, while Odera was inherited, like a living part of the presidential compound. His great pride was a whole roasted goat stuffed with rice, potatoes, carrots, parsley and peas, and served standing with the beard reattached. Once the chefs understood the stakes, they played the game. Mr. K brags: “I knew how to improve his temper. Quite often he’d sit down at the table feeling agitated and get up in a good mood, joking even. Who knows how many people’s lives I saved that way?” This is followed a few pages later by cold desperation when he explains why he persuaded Hoxha’s sister to teach him the family recipe for shapkat, an Albanian pie made with feta, spinach and dill: “If I replaced his mother, he couldn’t kill me.”

The favourable circumstances that allow such people to gain power are, for the most part, social, and how and when do cultures of extreme control emerge is the question rumbling underneath the book. Why do we come to tolerate, or even desire, bullies? Celebrity chefs’ blowups were, until recently, one of the few remaining acceptable forms of abuse as entertainment, the idea being that haute cuisine demands suffering and it’s fun to watch Gordon Ramsay yell at people. Amin’s Odera admits as much when he says: “In the kitchen, I was the dictator.” It’s a false equivalence, since Odera never killed anyone, but it points to a shared logic, as if there could be sufficient pleasure for the individual diner, or for the nation, to justify the pain.

This article appears in print in the May 2020 issue of Maclean’s magazine with the headline, “The strongman’s stomach.” Subscribe to the monthly print magazine here.