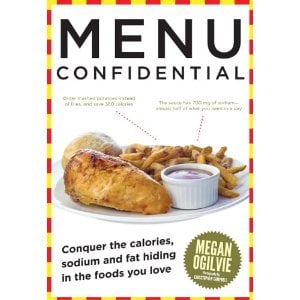 I love a California sandwich, with provolone, peppers, mushrooms and onions please. I do not share the mammoth thing. I eat it on my own. But last week, Megan Ogilvie, who has been exposing the often heart-breaking caloric, fat and sodium contents of popular take-out foods in her Toronto Star column, The Dish, for over two years now, revealed that the chicken cutlet version has 1,240 calories, 53 grams of fat and 2,520 mg of sodium. Despite this, I will still eat my veal version, albeit maybe less often.

Today, Ogilvie’s new book, Menu Confidential, which reveals the nutritional breakdown of over 100 of dishes from across the country, comes out. Warning: some spirits will be stricken. But the book, her first, doesn’t just deliver mind-boggling stats and informative tidbits–a Costco blueberry muffin, for example, has roughly one third of your day’s worth of calories–it also gives readers options. And there are pleasant surprises, too. A Harvey’s hamburger, for example, is a pretty good option when it comes to burgers on the go. And it’s not about denial, either. Have your ice cream. But maybe skip the whipped cream and toppings. Megan, 33, had a chance to talk with me about her new book and some of her own indulgences.

Q: You must have broken a lot of hearts by exposing the caloric, fat and sodium contents of so many favourite take-out foods. You broke my heart on occasion, but at the end of the day, it’s a good thing.

A: I think so. I learn stuff every time I get lab results back and spend some time looking at the numbers but I feel that once I know, then I know.

Q: Which of those Toronto Star columns received the most responses?

A: A roti from Gandhi’s on Queen West. I was getting emails from people that just read, “Noooooooooo!” That’s definitely sticks out. It sounded like it was many people’s favourite Friday night treat.

Q: I remember that one. A definite heart-breaker. But I was thrilled by a few inclusions in the book, like Harvey’s for instance.

A: Yes! The Harvey’s burger.

Q: It ends up being, well, not terrible.

A: When I go out for a burger, that’s the one I go to. I will sometimes go for the “Little Original,” the junior size, because it’s not that much smaller, and by the time you cram on those great fresh toppings I still feel like I got a good burger.

Q: The book is almost like a cheater’s, or insider’s guide on no-brainer things to pass on in order to be healthier. For instance: condiments. It never occurred to me, to be honest, that they might be high in anything bad.

A: Me neither, until I added it all up. The sodium? I love mustard too, but now I know.

A: Yes, but I’ll skip the relish. Sometimes I’ll have a dab of ketchup too.

Q: The high sodium numbers in the book really shocked me. I love how you relayed the amounts in the form of shakes of salt.

A: That’s because when I first started out doing nutrition stuff, the milligrams of sodium meant absolutely nothing to me. I knew that we had to have no more than 2,300 mg a day but where that came from, I had no idea. So it was a dietition who suggested breaking it down to either teaspoons or standard shakes from a salt shaker so that people could better understand the amount.

Q: You warn folks that sometimes the lighter-looking fare can often yield terrible conseuqences in terms of fat and calories. Was there a dish that was particularly shocking?

A: Yes, and I think we did it in the column too: It was pad thai from Thai Express. You sort of know it’s not the same as a salad but it’s got chicken and vegetables and rice noodles so you think how bad can it be? It has over 1,100 calories. I was at the grcoery store and I thought, What does that compare to? And it’s the same as eating four microwave dinners, which I would never do!

Q: I have to admit that there’s part of me that thinks if you’ve made the decision to go out to Harvey’s or McDonald’s and then to not get french fries, well, that seems almost sacrilege. But I found the message of the book isn’t about denial: It’s not suggesting to not go to McDonald’s, but maybe don’t go everyday, and when you do go, here are some helpful tips on how to make smart choices.

A: That’s exactly what I wanted because that’s the way I eat and that’s the way I eat when I go out with my friends or my family. I don’t go out to McDonald’s every day, but when I do I like to get something that I wouldn’t necessarily have at home. I just know now to always go for the junior size or not the super size, at least. You can make smart choices.

Q: You include so many places in the book, from Tim Hortons to the Keg. Oh, and Swiss Chalet! The way you wrote about the quarter chicken dinner made me laugh.  I think you said it’s the kind of place where you don’t even need to open up a menu.

Q: Me neither. Quarter chicken dinner with fries. I was actually surprised to see that the whole meal, with the bun and sauce, is only 955 calories, 38.5 grams of fat, and well, a heck of a lot of sodium (1,315 mg). And I know you’re not a dietitian but after I read that I thought, well that’s not that bad. I would tone down my breakfast and lunch–just fruits and vegetables if I could–and save up those calories so I could indulge at dinner. Is that a bad idea?

A: I don’t think so, and as you say I’m not a nutritionist, but I’ve talked to lots and that’s the way I eat too. You know it’s going to be about a 1,000 calories, which for me would be about half my calories for the day. When you look at that plate, there’s not a lot of colour there–

Q: Just shades of white and brown, I believe.

A: Exactly, so for breakfast and lunch I’d probably have a lot of fruits and vegetables and know that I was going to have a treat for dinner. And when you look at each component of this meal, the French fries are the thing that really skews things. Even asking the server to bring have the amount of fries really helps.

Q: I feel so sad just hearing that.

A: If I tried to ration myself to eat half the fries, well, that’s not going to happen.

Q: No way. I don’t think I’ve ever left a French fry uneaten, unless it’s been a terrible example of  French fry. No, not even then.

A: But then you’re down to 250 calories and maybe 15 grams of fat, and then I can really enjoy every French fry. That’s just something that I would do.

Q: You recommend sometimes choosing the lower-fat options, like for yogurt or sour cream, when eating out. But some might argue, in particular something like non-fat sour cream, that when you see that in the grocery store it’s actually labelled “sour cream product” because without the fat it ceases to become sour cream. Do you weigh the pros and cons of the chemical sort of stuff that goes into making something low-fat versus just having the full-fat product?

A: You know, I do because even though this book is all about either fast food, takeout food or restaurant chain food, when I eat at home, I love to cook–and I go to the farmers’ market and really consider my meals at home along the lines of the whole foods movement. So for me, if I eat sour cream at home I know it’s going to be a treat and I go for the real thing. That’s my personal choice. But if you’re eating out every day and it becomes more like fuel rather than something that’s going to taste great, then I’d go for the lower calorie, lower fat option.

Q: How many times a week do you eat out?

A: That really depends on my work week. I’m sure that’s the same for all of us. On Sundays I try to work ahead to get my lunches packed and my dinners made but by Wednesday that goes off the track. So by then, or Thursday or Friday, I could be eating out for breakfast lunch and dinner. So now I know.

Q: For whom is this book written?

A: I really hope, and I know most authors would say this, but I hope it’s for everyone because we all have really great intentions and it’s easier to stick to them at home but when we’re on a road trip or working 50 hours a week or out with the kids and they really want Harvey’s, then this stuff comes up. So I hope people will read it, and not make choices because they want to lose weight, but make choices because they want to be informed diners.

Q: I still can’t bear to look at the pizza results. I can’t bear to realized that a serving is probably one, maybe two slices. In my head, well, it’s more than that.

A: The one thing that shocked me at Pizza Pizza is dipping suace, which I’ve never really considered or tried. But I couldn’t believe that the creamy garlic sauce is like adding an order of French fries to your pizza, which is kind of gross.