Author Mike Barnes steps out from the darkness 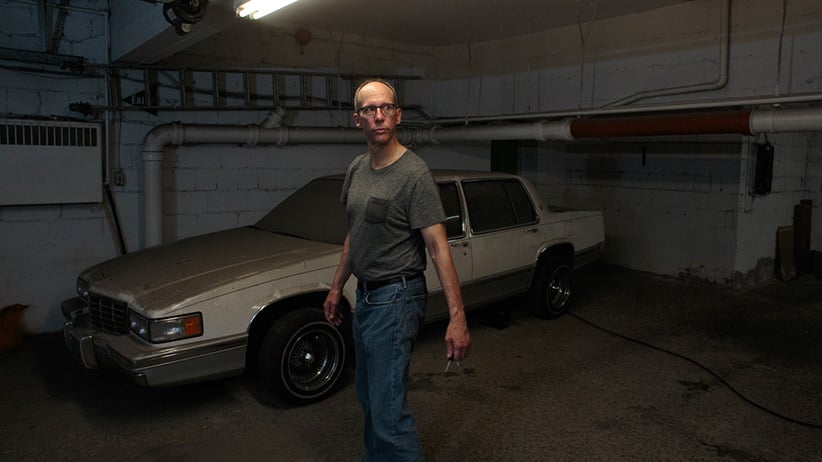 It’s mid-October and the anonymous protagonist of Mike Barnes’s The Adjustment League is acutely aware he’s running out of time. The Super, as he’s known for his work maintaining a shabby Toronto apartment building in exchange for cheap rent, has a face that looks like it’s been through a lot, none of it good—an exceptional skill set learned in depressing places and some disturbing allies. He has a burning hatred of injustice, especially when it’s directed at the marginalized, and a readiness to do something about it—to make a tiny, precise “adjustment” to the world’s injustices. The Super, in short, will definitely unclog your toilet, literally or metaphorically.

He also profoundly bipolar, a sixtysomething man who has learned to build his life around the predictable seasonal transitions in his adult life, from rough equilibrium to windows of intense, increasingly sleepless hyperactivity and awareness to mute, motionless collapse. Much like his creator.

Barnes is a well-regarded Canadian writer, the author of poetry collections shortlisted for major awards, short fiction that has appeared in Best Canadian Stories and The Journey Prize Anthology, a memoir and an earlier novel. He too has cycled in and out of mental illness for decades. After some out-patient treatment during his teen years, Barnes, now 61, had a psychotic episode at age 22 that “landed me in hospital for two years, in what was supposed to be a short-term ward,” he says in an interview. “My doctor told me later my original diagnosis was schizophrenia, which, if it had stuck, would have meant heavy drugs and maybe long-term institutionalization. But some guardian angel among the professionals—I never found out who—and my mother fought that.”

After that it was seven years of intermittent work as a janitor, dishwasher or security guard—and a whole lot of reading. In a brighter patch around his 30th birthday, Barnes returned to his long-abandoned B.A., added a B.Ed., and managed to teach happily for three years. Then another disaster: a severe bout of not-yet-diagnosed mania ended in another psychotic break, the end of Barnes’s stab at a regular life and five years of subsisting on disability payments.

Both episodes have parallels in the life of the Super, who shares a lot with Barnes—they even live in the same apartment building in midtown Toronto, albeit not the same unit. But Barnes grew up in his family home in Hamilton, while the Super, a former foster child, has a horrific yet wholly imaginary backstory. (The Adjustment League is suspenseful, exquisitely written and—at times—corrosively funny, but it’s as noir a crime novel as might be expected from its working title, The Boiled Child.)

Early every November, the Super falls out of the mania that intensifies earlier in the fall, into the near-catatonia that annually sees him through Christmas—which he calls “the Ebola of holidays”—into the new year. So when a call for help comes to him from deep in the past on Oct. 19, there’s no question about whether to answer, but deep worry about how well he could in the time available. Decades before, the Super had organized a handful of patients on his ward into an “adjustment league”—each palmed one of their daily pill allotment and the resulting toxic stew was slipped into the drink of an abusive staffer. Now, one of the original league has left a cryptic message, an address in a Toronto suburb, signed “TAL.”

When he arrives at an old age home in Markham an hour later, the Super finds former ward mate Judy beside the body of her mother, dead of Alzheimer’s. The more he delves into the neglect of the two women by the affluent, powerful and ostensibly sane male members of their family, the more the Super is committed to an adjustment—diverting family money to her care—on Judy’s behalf. Except the necessary adjustment keeps turning into something larger the more he learns about the men, the window of opportunity keeps getting smaller, his mania more intense, and his trust in his own thinking less certain, even while the tension and danger keep ratcheting higher.

The genesis of The Adjustment League does not actually lie with Judy—though she too carries aspects of Barnes in her backstory—but in her mother. Writer and protagonist both equate neglect of the elderly, especially those with dementia, with neglect of the mentally ill. After the Super mordantly assesses the fighting capacity of his current allies—“a brainsick girl and her dead mother” (before bucking himself up by declaring, “You’ve had worse”)—he asks rhetorically how anyone “earns” a loss of care, family and civil rights. “You get sick.”

Barnes has been the primary caregiver for his own 90-year-old mother for the five years since she’s been diagnosed with Alzheimer’s. “My publisher [Biblioasis’s] Dan Wells asked me for a piece on caregiving—a kindness, I think, to me during a rough patch, something to keep me in the writing game. I took notes, felt my anger at the empty hallways in the home, with nobody visiting. I was simmering with rage when I thought: there’s a genre made for that. Crime fiction welcomes rage at villains, especially wealthy villains. If nothing else, I’d have a chance to vent.” A noir novel turned out to be the ideal vessel for a stew of anger, sadness and indignation at the cost and, even more, the stigma of mental illness, “leaving, as an added bonus, room for the black high spirits of revenge.”

Barnes married at 40, just as he was coming out of the five years when he thought he’d never work again. In 1995, he and Heather moved to Toronto where he found a tutoring agency “that took more than half my pay,’” and, although he now works for himself, has never stopped. Despite an annual income that’s never topped $20,000, the work makes him feel useful. “Mental illness in any form is a learning disability. If I have not faced the particular learning challenge my student is facing, I have faced analogous ones,” and have worked out ways of coping. The exceptionally well-read Super also tutors a child in his building during his off hours. In exchange the boy’s father maintains the old car that a grateful adjustment beneficiary gave the Super for “convincing” her ex-husband to exit her life. The Super has a nest egg—his ex-wife’s father paid him off to get out of her life—but as far as possible he maintains his unemployable self off the grid.

If Barnes’s post-ward life seems better and calmer than the Super’s, there’s a new catch. The Super can still count on the regularity of his mood swings; with age, Barnes, who also slipped into depression every November, can no longer be sure when or how his state will alter. “The intervals, the timing, the severity, have all become less predictable,” he says. He wrote The Adjustment League in Toronto over the course of 2014—the mayoralty of Rob Ford was a constant background hum—and sent it off to his publisher. Nothing much happened with it in 2015, due to Biblioasis’s other commitments, before Barnes tumbled that December into a psychosis rivalled only by the two episodes that put him in hospital. “In late January I thought I’d never work again. Writing was far from my mind.” 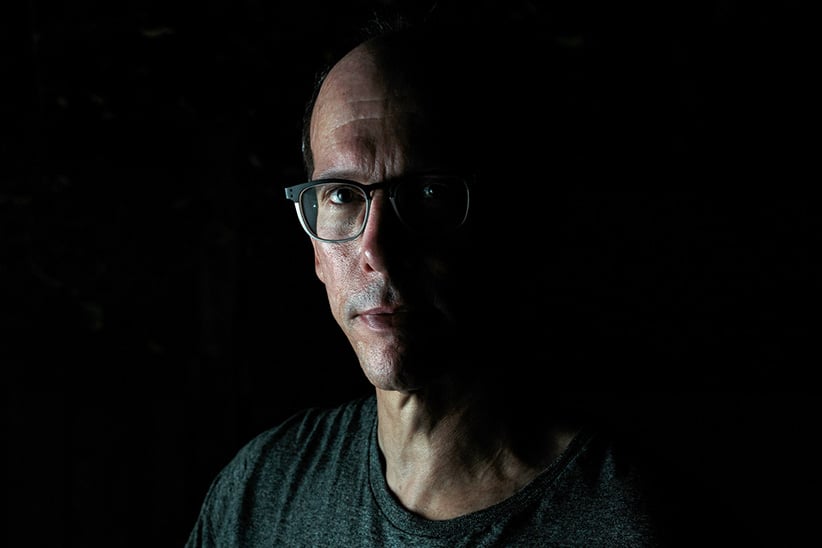 One December, Barnes tumbled into a psychosis that put him in the hospital. ‘Writing was far from my mind.’ (Photograph by Liam Maloney)

A month later, Barnes was just beginning to see daylight again, when the manuscript came back from Wells with editorial suggestions (including changing the less-than-reader-friendly working title). “It was a bit like Lazarus, one step from the tomb, being reminded of a job application he’d submitted two years previously.” He waited a day before opening the package: “I could still barely read—I would check by opening familiar books at random and seeing whether I could understand a sentence.” He made it through by using the same “enormous bag of tricks” he does to help his students: moving from strictly factual sentences to more poetic descriptions, spending no more than 20 minutes at a time without a break, checking his own state by trying to compose an original sentence having nothing to do with the book.

For all the havoc mental illness plays with the art and craft of writing, though, it demolishes an author’s public life. (That’s especially true for a writer once mostly unable to interact with readers during publishing’s autumn prime time, and now unpredictable throughout the year.) Barnes always dreaded his public outings and made them as “rare and brief” as possible. They have to be scheduled well in advance, by someone who has less idea than most of us how he will be feeling then. For every event that’s gone well, Barnes remembers one that was an ordeal, when he couldn’t remember the books he and other writers were supposed to be discussing, “including my own.” Maybe, he thinks now, he should have confessed rather than bluff his way through: perhaps “some (well-hidden) members in the audience might have welcomed it?”

Now that Barnes has decided to be open about his mental health, he has a strategy for that too. He’s penned a series of essays—on his own history, on the mutual benefits of caring for his mother, on the origins of The Adjustment League, and his memories of reading in a freight elevator while dodging his janitorial duties. If ever he cannot temporarily speak for himself, the essays can do so, making a Super-like adjustment to level the field.