Much more than another book about the Hindenburg disaster

Book review: A history of illogical yet out-of-control engineering, from the Superconducting Super Collider to the Zeppelin 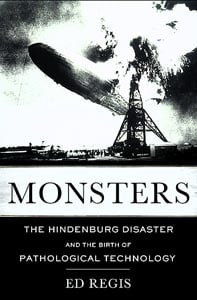 MONSTERS: THE HINDENBURG DISASTER AND THE BIRTH OF PATHOLOGICAL TECHNOLOGY

Tracing a line from Zeppelins to the Pan-Atomic Canal, from particle accelerators to interstellar travel, Regis picks out a case for what he calls “pathological” technologies: huge projects with an apparently magical ability to continue even, or especially, when it’s obvious they should end. It might be a way of justifying yet another book about the Hindenburg disaster, but it is a fun one. You will learn things.

The Zeppelin was conceived as a military aircraft, a balloon the size of a building filled with explosive gas. It seems almost trivial that, before radio, Zeppelins had to communicate by yelling at the ground and, at least once, by dropping leaflets asking for help to land. Early flights are described as a state of continual emergency; these things crashed and exploded when they weren’t being shot at and, after the First World War, even the Germans couldn’t support further development, despite the symbolic status of the craft. The Zeppelin company turned to passenger travel with well-known results.

In the characteristic style of early-20th-century engineering, Zeppelins were made out of a new high-tech metal, aluminum, and lifted by gas bags hand-stitched out of cow intestine—850,000 cows for one airship. Most were literally constructed from the previous wreck (that should have been a clue) and all lacked sufficient power and surfaces for controlled flight. But one, the Graf Zeppelin, was the first aircraft to fly one million miles. It would be nice to know why.

The Zeppelin story forms the bulk of the book and is the most developed, aided by the acknowledged contribution of amateur historians of the Hindenburg disaster. Was there a bomb on the ship? No. Why would you need a bomb? The ship was a bomb. Yet two-thirds on-board survived, so, by Zeppelin standards, the Hindenburg disaster was not particularly disastrous—but it was the first to be filmed and widely broadcast.

Regis rounds out a list of pathological technologies with Project Chariot’s appalling plan to nuke a harbour out of remote Alaska, the mothballed Superconducting Super Collider, and the DARPA-funded 100 Year Starship Study. Atomic bomb-based construction is plainly insane. (It would take a whole book to explain how it was ever seriously considered.) The Super Collider, less so. Stories of the Titanic and the Concorde might have made better cases, but why limit it to technology? Banks were recently called “too big to fail.”