Must-read books for May: saints, soldiers and social media

Books to read this month: a new history of Russia’s obsession with war, a modern-day Thoreau pens a social media anti-manifesto, and more 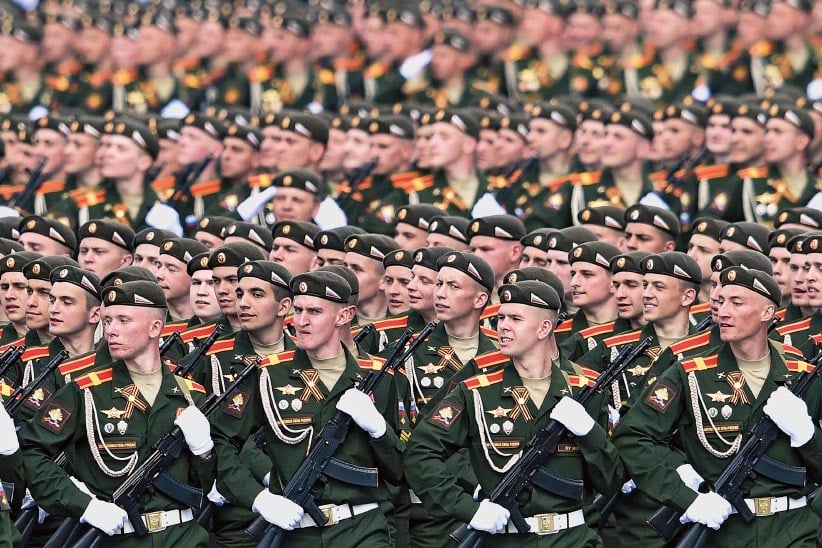 Russian soldiers march at the Red Square during the Victory Day military parade general rehearsal in Moscow on May 7, 2016. (Kirill Kudryavtsev/AFP/Getty Images)

This month in book reviews: A new history of Russian war. A love letter to being alone. A fictionalized reimagining of Susanna Moodie. A searing depiction of the fall of Iraq. Read more below and check out the rest of our book reviews. 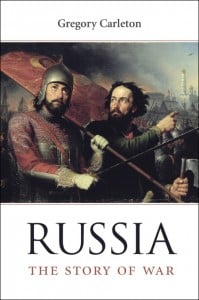 RUSSIA: THE STORY OF WAR

There are any number of illuminating facts in this persuasive survey of Russian exceptionalism—the notion, widely held by Russians for centuries, that their nation is the sacrificial bulwark of Christian civilization, the people who disproportionately shed their blood to preserve the West from Mongols, Napoleon and Hitler. Does any other country, asks Carleton, a professor of Russian studies at Tufts University in Massachusetts, have a patron saint for its nuclear bombers? More germane to the construction of what Carleton calls contemporary Russia’s “civil religion” is how Fyodor Ushakov—once a hero of the atheistic Soviet state—was canonized in 2001. He was an 18th-century admiral who never lost a battle: defending Mother Russia was what mattered, with more Christ-like activities unnecessary.

Yet Ushakov was perhaps too successful to be a fit patron saint, since the key theme in the national narrative is loss while resisting foreign invasion. That concept now focuses on the 27 million dead of the Second World War, but its roots are ancient. Medieval Russian cities not razed by Mongols created legends of their own destruction, to prove themselves just as worthy of honour as the actual victims. After the Japanese annihilated the czarist fleet at Tsushima in 1905, the cruiser Variag sailed out of a neutral port to meet the enemy on an honour-bound suicide. Soon the ship was a slaughterhouse, according to a surviving officer, drenched in “blood and more blood, burst hands and legs, bodies torn apart and raw flesh.” In Russia the survivors were greeted by an admiral who praised them for demonstrating “that Russians know how to die,” and by a rousing patriotic hymn. With such lines as “No need for mercy have we,” Variag remains the Russian navy’s unofficial anthem.

The dominant sacrifice theme matters, Carleton argues, because it’s at the core of mutual incomprehension between Russia and the West. For the former, it justifies “border pacifications” (annexing Crimea, supporting rebels in Ukraine); for the latter it is a veil over naked aggression, “the bear on the prowl again.” There is truth on both sides, the author writes, for the concept has survived centuries of political upheaval: Ushakov was a hero to the czars who employed him, the Soviets who overthrew them and the Putin regime of today—not to mention the Orthodox Church, which will no doubt survive them all. 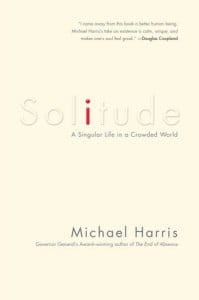 SOLITUDE: A SINGULAR LIFE IN A CROWDED WORLD

Lively and concise, Michael Harris’s new book, Solitude, is an offshoot, and at times a reiteration, of his previous one, The End of Absence, which pinpointed the Internet’s generational Rubicon (1985), then looked at what’s been lost since its crossing (Harris tends to use “absence” and “solitude” interchangeably).

Solitude is less a study of aloneness, whose benefits—the generation of fresh ideas, more meaningful connections with oneself and others—Harris readily extols, than an accounting of the insidious, ever-proliferating technologies that imperil its achievement. Glazed hours spent playing addictive games like Candy Crush might feel meditative, but the ludic loop state they induce (so-called because they cater, repetitiously, to our brain’s pleasure centres) quashes the possibility of daydreaming and thereby true solitude. These games are, Harris argues “an invasive species, dominating the ground where solitude would otherwise grow.” Social media does something similar but with different bait—social approval instead of digital bonbons.

In a world where even our appliances beckon us online, exempting oneself has come to seem suspect, anti-social. Harris sees in the war on solitude a threat to individuality itself, and gives over one of the book’s sections to showing how the Internet’s hive mentality homogenizes everything from personal style to the restaurants we choose to our physical navigation of the world. Even death, solitude’s last, inviolable frontier, is under assault: several Silicon Valley companies have made immortality their holy grail, but if you don’t make it to the ribbon cuttings, several others can ensure your digital presence after death.

Harris’s articulate, unpretentious style and well-curated examples (there’s a chapter on the solitudinous benefits of typing letters) offset the occasional treading of familiar ground, as do the book’s interviews and personal anecdotes.

Central to The End of Absence was Harris’s attempt to live offline for a month. Here, realizing that in 36 years he hasn’t spent more than 24 hours alone, he takes things geographically (if not temporally) further by embarking upon a contact- and tech-free week at the family cottage on B.C.’s Pender Island. That might strike you as slightly less than heroic, especially in comparison to the story that opens the book: Dr. Edith Bone mentally withstood seven years of solitary in a Hungarian prison in the ’50s. As someone barely over the Internet Rubicon himself, however, Harris is charmingly aware of his limitations. Baby steps. 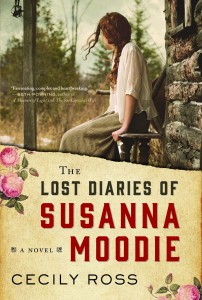 THE LOST DIARIES OF SUSANNA MOODIE

The author concludes this novel with a section called “Dark Days.” Considering the torrent of miseries Mrs. Moodie has sketched across the previous 300 pages, that title might be ironic. To anyone who has come to understand life in the 1830s and ’40s from Pioneer Days civic events (with their saloon garb and flapjacks), Ross’s expert ventriloquy of Moodie’s travails is eye-opening—settler-era Canada as a Boschian horror show. The hard-luck anecdotes are so over the top that they become the literary equivalent of scenery chewing: they’re engrossing, if harrowing, entertainment.

A genteel struggling writer sick of England’s “pinched air of propriety,” who is scared into marriage after a failed seduction attempt by Mary Shelley (the acquaintance with Shelley and proposition are Ross’s inventions), Moodie reluctantly follows her man, an ex-soldier with boundless optimism but less sense. Arriving in Montreal in 1832, Moodie becomes a zealous documentarian of her adopted home’s chronic failings—from pestilential hotels and “dens of filth” to streets with an “atmosphere of anarchy and misrule,” and where bells toll regularly to announce deaths by cholera.

Further, one disastrous southern Ontario farming venture (in a “godforsaken backwater”) comes on the heel of a first (with residence in an “unspeakable hovel”). Moodie’s minutes of satisfaction and accomplishment are fleeting at best. Uncultured rustics—a “sack of vermin” here, scoundrels and “sullen backward harpies” there—compete with oppressive weather, crippling debt, family squabbles, self-loathing and a foolish husband “bursting with plans and schemes” to annihilate her hope.

And when she writes, “Snow. On top of everything else, snow,” “summer, with its torpor and insects, descends like a sweaty towel,” or (in anticipation of yet another pregnancy), “As I feared, my usual visitor is late,” her drama queen-like declarations (“My only hope lies in the oblivion of death”) become understandable. As do her volatile emotional states, which careen from anger (“I am filled with molten fury”) to bitter despondency and numbness. “This land has been our undoing,” she writes, echoing Margaret Atwood’s Moodie of nearly 50 years ago. Then, as now, hers is a compelling tale. 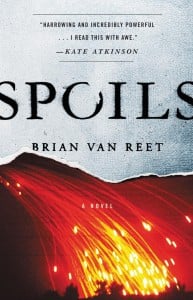 Near the beginning of Spoils, U.S. army tank crewman Sleed (no first name given) watches his commander, Galvan, take photos of dead Iraqi troops. He asks, “You ain’t worried about those Geneva Conventions or nothing, huh, sergeant?” Galvan laughs. “Don’t you know this whole fucking war is illegal?” Set in 2003, Van Reet’s debut novel is about the conflict in and around Fallujah in the wake of the fall of Baghdad. More broadly, it’s about the collapse of ideals and dreams in the chaos of war. Van Reet was himself a tank crewman who left the University of Virginia (where he was enrolled in a top scholar program) after 9/11 to serve. He found himself on stop-loss duty—stuck in Iraq for 18 months, twice as long as he’d signed up for. And although he won a Bronze Star for valour, he clearly isn’t gung-ho about the American war effort.

Spoils is compelling thanks not only to the wealth of sharply drawn, authentic-seeming detail that fleshes out Van Reet’s disillusionment, but also to his expansive imagination. It’s split into three narratives with three troubled protagonists: Cassandra, a 19-year-old gunner on an armoured Humvee, whose determination and spirit are challenged, first when she queries an unsolved rape at a base, and then when she is captured by mujahideen; Abu Al-Hool (“Father of Dread”), an aging insurgent who is increasingly doubtful about the debased tactics of his group’s new leader; and Sleed, who gets caught up in a lethal spiral of selfishness and incompetence. Van Reet skilfully balances Cassandra’s embattled tenacity with Sleed’s self-deprecating matter-of-factness and Al-Hool’s impassioned and sometimes startling lyricism (“I was willpower hurtling through space”).

The title, too, works in three different ways, referring to the spoils of war (such as Galvan’s war photos, or souvenirs from Saddam Hussein’s palaces), the twisted growth of spoiled children into confused rebels, and the way war spoils everything that wasn’t already rotten. The stories come together in a way that’s less suggestive of an epic adventure than an inevitable car crash. Spoils is by no means a happy read, but it’s unflaggingly intense and at times grimly exhilarating—like driving a tank off a cliff.