Cathrin Bradbury comes to terms with her dad's optimism forged by an early encounter with darkness in her new book documenting their final months together. Read an excerpt here. 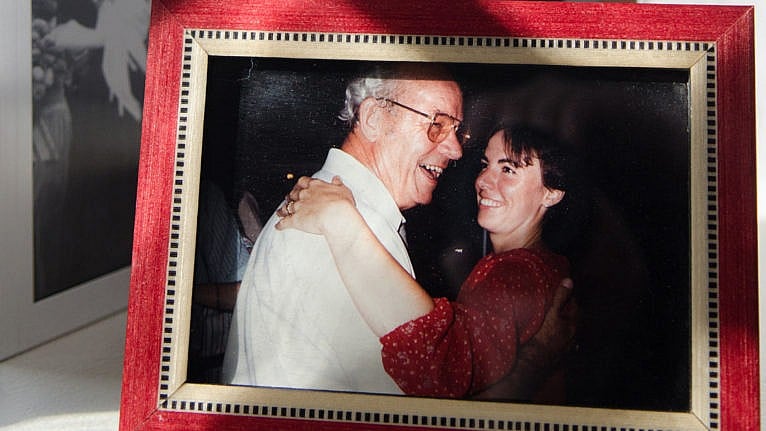 Even as Bill (with Cathrin, right) grew older, he held on to his optimism; or it held on to him (Photograph by Mary Barber)

In a year when many Canadians were separated from parents in nursing homes, Cathrin Bradbury recalls happier times with her 94-year-old father William (Bill) in Toronto’s Sunnybrook Hospital Veterans Centre, where she was grateful to spend his final months together.

Dad was making a speech in my living room for his 85th birthday, and when he got to the 80s, he hesitated.

“The 80s, I’m not so sure.” His idea that the future was always brighter sustained him throughout his life, until the facts couldn’t keep up with the philosophy. His physical limitations meant his energy to keep going had to be balanced with a frequent need to sit still, and his dementia meant his forward pace had lost much of its purpose now that he couldn’t remember where he’d just been.

And yet he held on to his optimism, or it held on to him. His insistence that everything be seen in the best light as we grew up meant that a lot was shut down. When he extolled a burnt husk of beef, my teenage self shot death rays at him across the dinner table, because this was his line in the sand—this good cheer over the unchewable brisket meant you couldn’t speak the truth about it, or anything else, without creating a ripple of unrest in his peaceable kingdom.

RELATED: The guilt and anguish of looking after elderly parents

Dad’s childhood was often precarious, which was perhaps why he was determined to give his children a steady upbringing, with a lot of singing. His mother began work in the English cotton mills at 14. Later, raising five kids in Toronto’s east end, she packed off with her bags once a week, and when she was home, she sometimes locked Dad in the basement. These stories he rarely told, or if he did, it was with mild surprise and not a lot of interest. “I don’t know what she was thinking, really.” If Dad had darkness, I didn’t encounter it in the 60 years I knew him. He didn’t linger or dwell, especially not on pain. “Suffer less” was Dad’s dictum.

In the seven months he went on alone after our mother died, he did suffer, though. Each morning, he had to be reminded that his wife of 72 years was dead, new grief at dawn. He began to fall, off balance without Mom.

“How are you doing, Dad?” I said when I found him in a small curtained-off area at St. Michael’s Emergency in downtown Toronto on the tenth fall or so. His forehead was oozing blood from under a makeshift bandage. “Stood up too fast, I guess.” His bright-side kingdom never flourished more than when he was in the hospital. His cot posture was the same as his lounge-on-the-beach pose: legs crossed at the ankles, right hand under his head with elbow crooked. The only thing missing was the book in his left hand. And the beach.

“Anything I can get while you wait, Mr. Bradbury?” one of the nurses said as she took his blood pressure.

He’d had plenty of opportunity to hone his hospital style. Philip Roth said getting old “isn’t a battle, it’s a massacre,” and few knew this better than Dad. He’d spent his last 30 years battling cancer and heart disease, although he had the recovery speed of the Road Runner on an asphalt track. When my son Kelly and I walked into his room after a four-hour surgery for an aortic aneurysm, we caught him looking out at a grey concrete wall with a smile on his face. “I even have a window view,” he said.

After his last fall, our family agreed to secure him a spot at the Sunnybrook Hospital Veterans Centre, in the city’s north end. Dad’s mental incapacity meant he would live in a locked wing. This hurt our hearts. He loved busting out for walks. The second blow was when we toured the common area for the locked-in veterans. Dad was excited on the way there. “We had a lot of fun in the war, you know. Singing and cards. They’re a great bunch of guys.” When we walked into the room, most of the men were sunk down in their wheelchairs. The look on Dad’s face, from hope to despair, registered quickly. Emotionally, though, the trek must have been terrifying, from the man he imagined he was—air force cap pushed back on his head, quick with the sums that made him unbeatable at cribbage—to the one he could become, one of the slack-jawed men he saw around him.

READ: The year of the pandemic has busted the myth that Canada values its seniors

“I appreciate everything you kids have done for me,” he said with his simple demeanour as he pushed his walker through the bunker-like hallways. “I believe I’m exactly where I need to be.”

“We’ve got a happy one,” said his nurse, Maria, when the doctor came by to see Dad in his new room.

“Your troubles are over, Mr. Bradbury,” said the tall, thin doctor. “You’ll never have to go to emergency again. We’ll look after all your needs right here.”

The good doctor was right: his troubles were over, for a while. He missed Mom less without her empty chair beside him. The locked ward didn’t trouble him either; it wasn’t a thing, anymore, to wander. He got busy, putting his hand up for everything. The men’s singing group didn’t care if he remembered all the words; few of them did. He even joined a bridge group, briefly. “They’re past it, they can’t bid,” he said to my sister Laura, a primo pot/kettle moment.

Mostly, though, our pleasures with Dad were small and private. My brother David joined him for breakfasts in the central garden. One day a plane passed high up, a white chalk underline in the pale blue sky. “Most people wouldn’t recognize it, but I know immediately that’s a jet flying overhead,” Dad said. He’d been a pilot in the Second World War and “Up there with the birds!” was among the last things he said.

He liked the birds—I’ve never met anyone over 90 who didn’t—and he and I sat by the feeders in front of the veterans’ home. “I loved our friends, you know,” Dad said as we watched the sun-yellow finches land and then fly up and away. “Once, Dale across the street came by when I was painting and said, ‘Let me help you paint your house.’ That’s the kind of friends we had our whole lives.”

I smiled at him smiling and realized I no longer felt oppressed by his optimism. Dad had known darkness as a boy, locked in that basement. He had known it growing up rough and poor in the Depression, and going to war, too, but he chose not to stay there. That would have felt like wallowing to him, but it was likely also the reason he chose to use his happiness as a guide, not a goal. As the most salient of his characteristics. Dad taught himself to desire what he had, not what he aspired to. “I’ll be lucky to hold on to Granddad’s view when I stare at my own concrete walls,” was how Kelly put it.

For a break from the routine of birds, singing, garden walks, and the one-minute repeating loop of conversation, there were outings. My brother Tim and I took him to the air show at Exhibition Place by Lake Ontario, where pilots from around the world did aerobatics in the sky and afterwards came and shook hands with the veterans in their front-row seats. “Tricky to land,” said an American pilot when Dad told him he’d flown the de Havilland Mosquito. “A good landing was the one you walked away from,” Dad said, and the airman gave him a heart-thumping grin.

This pilot wore a zippered navy jumpsuit, looked like Tom Cruise in Top Gun and had just flown a massive black jet at death-defying speed, so even though he was there to cheer my ancient father, I batted my eyes at him. Dad wasn’t the only optimist. “The air show is way better in person!” I wrote on Facebook.

The apex of the sunny day was when five women and one man from Normandy, each gloriously, beautifully young, gathered around Dad on his folding chair, in his straw fedora, navy blazer and serious shades, and kissed him on both cheeks, 12 kisses total. “Dad heaven,” said Tim.

Dad smiled with his whole head. You could have seen it from the CF-18 Hornet in the sky.

Excerpted from The Bright Side: Twelve Months, Three Heartbreaks, and One (Maybe) Miracle by Cathrin Bradbury. Copyright © 2021 Cathrin Bradbury. Reproduced by arrangement with the Publisher. All rights reserved.