Book review: The Brief, Remarkable Life of Danny Lewin, the Genius who Transformed the Internet 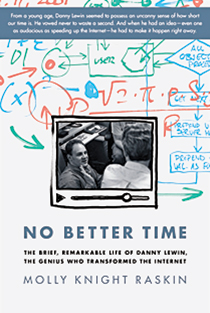 No Better Time: The Brief, Remarkable Life of Danny Lewin, the Genius who Transformed the Internet

Whether it’s Facebook updates or a favourite TV show on Netflix, many of us take for granted that the Internet will deliver what we want, the second we want it. But it wasn’t always this way. As recently as the late 1990s, the web’s core infrastructure was at risk of buckling under the weight of millions of new users. Popular websites took ages to load, if at all, and it was increasingly apparent that simply adding more servers wasn’t going to work.

A novel solution to the “World Wide Wait” came from an unlikely place: an American-born, Israeli-raised counterterrorism soldier who also happened to a mathematical whiz. Danny Lewin and his MIT adviser, Thomson Leighton, built Akamai Technologies on a mathematical algorithm Lewin devised to route the web’s content dynamically. The specifics of “consistent hashing” are complex, but it effectively meant that a sudden, unexpected surge in traffic or a downed server would no longer cause a crippling traffic jam. Of course, convincing newly rich Silicon Valley entrepreneurs that their website woes could be solved by a couple of Boston academics wasn’t easy. Knight Raskin details the long, hard road from Lewin’s original idea to Akamai’s emergence as a Wall Street sensation, only to end up back in the financial wilderness after the dot-com bust in 2000.

Ironically, the world only fully realized the value of Akamai’s approach during the same massive news event that took Lewin’s life. Dozens of news outlets turned to Akamai in the immediate aftermath of the 9/11 attacks to help them deal with a flood of Internet traffic. At the same moment, the company learned its visionary founder was onboard American Airlines Flight 11 en route to Los Angeles. Lewin, then 31, has since been dubbed 9/11’s “first victim” since many are convinced he tried to thwart the hijacking given his charged personality and extensive counter-terrorism training (the 9/11 Commission said Lewin may have been stabbed in the throat). “In one day, Akamai went from the depths of despair to demonstrating to the world that we could do all the things we had promised. And then some,” remarked Jonathan Seelig, an Akamai co-founder. “That’s because of what Danny built.”