Not another Gone Girl knockoff 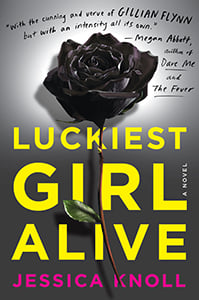 Now that rising temperatures are here and layers of clothing are disappearing, publishers are celebrating by releasing their annual glut of page-turners perfect for planned vacations. And while a friend may foist a copy of Girl On a Train on you, you’ll want to read something smart, sexy, and sharp afterward, something with more than a bit of heart and hope to it.

Luckiest Girl Alive, the debut novel from New York City-based magazine editor Jessica Knoll, might seem like another tired Gone Girl knockoff at first, but don’t be fooled. Ani FaNelli might live the ultimate privileged life, planning a storybook wedding to a fabulously rich banker while working a high-level job at a glossy magazine in Manhattan, but there is a good reason Knoll opens the novel by having Ani inspecting a knife in her hand (“the handle was supposed to be moisture resistant, but it was quickly going humid in my grip”).

Ani is not merely tough: she’s ferocious, and she has earned her luxurious, Upper East Side future. She counts her calories and reduces rivals to a withering quiver—in her head, almost never to their face—because to get the life she wants, she has to leave the life she once had far, far behind. Where the big reveal of Gone Girl showed Amy’s careful Cool Girl construct to be the wafer-thin invention of a cunning sociopath, Ani’s rich-girl reinvention, when exposed, shows her to be a woman of real courage, even of valour.

To say more would be to spoil the plot unduly. And the reveal of Luckiest Girl Alive is more than worth the wait because Knoll has more to offer than a mere rug-pull. The real story she tells is about the facades people create for themselves out of brute survival, out of a need to make sense of violent fragments. In which a knife in the hand might have multiple meanings, encompassing the entire spectrum of chaos and order, denial and directness, humanity and cruelty. This is a novel that smashes through tidy emotional boxes, that will intrude upon placid lives to confront the demons eager to assert dominance.