Photo book shows the lighter side of WWII 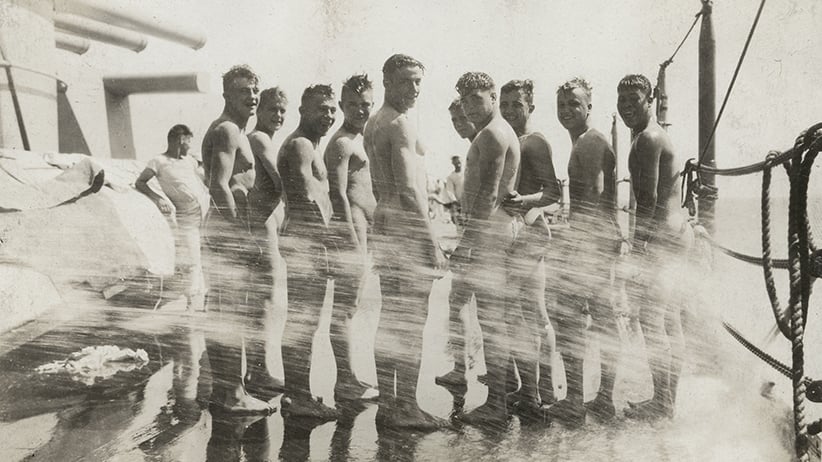 Most photographic evidence of the Second World War is of the sombre kind. The iconic images are often of live action: Robert Capa’s pictures of Normandy, W. Eugene Smith’s shots of American marines on the hillsides of Iwo Jima. Beyond that, there are those thousands of nearly uniform soldier portraits showing resolute young men, freshly conscripted and now destined for some foxhole in a faraway land.

These are the moments captured in My Buddy: World War II Laid Bare, a fantastic collection from Taschen of wartime soldiers (Allied and Axis) in various stages of undress (but mostly naked). The images come from the collection of photographer Michael Stokes, who hunted them down all over the world: in flea markets and ephemera shows, collectors’ closets and the depths of eBay. The editor, Dian Hanson, tried to organize them by nationality, but found she couldn’t: “Nudity is the great equalizer . . . English, Australian, Russian and American: All young soldiers, sailors, airmen and marines look the same naked and grinning.”

In a typical photo, three men stand under a shower wearing nothing but sandals. Their bodies are lean and slippery and suntanned—save for their bums, which are white as a sheet. They talk casually as they wash. In some, the nudity is almost secondary; men are caught sleeping or reclining—wholly unaware of the photographer. In others, they pose cheekily for the camera. One exuberant image shows 26 naked soldiers in the shallow waters of a beach, arranged in an elaborate acrobatic configuration that seems borrowed from a cheerleading competition.

How were these moments captured? By the Second World War, soldiers had a variety of small, fairly inexpensive cameras to choose from. (The German camera manufacturer Leica even produced a special model for Luftwaffe troops.) Many men did bring cameras into battle.

Included in the book is an excerpt from the memoir of writer (and former U.S. Army officer) Gore Vidal, which describes an evening off-duty: “Certain that I was going to be killed wherever it was that the ships would take us the next day, I thought that I should at least experiment with a potential Jimmie. For the first time, I picked up someone. A merchant mariner . . . he wore a wedding ring.” After the war, bisexuality became a source of intellectual interest, particularly with the publication of the 1948 Kinsey report, Sexual Behavior in the Human Male, which proposed a sliding scale of male sexuality. Perhaps some soldiers were testing out the Kinsey hypothesis, but most were just joshing around. It was a relief to be silly for a while—and it reinforced the “buddy” relationships that were essential to unit cohesion, and to dealing with the trauma of war.

It would be facile to describe these photos as simply homoerotic. Surely the best part of the book is a foul-mouthed essay by Scotty Bower, a 90-year-old former parachuter. “There was a certain amount of what they call grab-ass in the service,” he explains. “If the guys are buddies, the guy might throw his arm around you, you know, and then, the next time, it’s a little kiss on the cheek. And the next time, it’s a peter squeeze. You’re just very close buddies.” For him, buddy bonding began in the Pacific theatre. He describes soldiers on the beach: “You’re there in a little hole you dug in the sand, pissed off . . . You’re wet and it rains, frankly, every day and every night. Some guys huddle together.”

In her foreword, Hanson suggests,“These lighthearted photos will undoubtedly offend some people, those steeped in the gospel of ‘greatest generation.’ They won’t like their heroes so indisputably human, or the grim seriousness of war diminished by play.” But the soldiers themselves showed no sign of shame. They were just young men, some, barely past boyhood, having good, unselfconscious fun, in the shadow of great suffering.