Plutocrats: The Rise of the New Global Super Rich and the Fall of Everyone Else 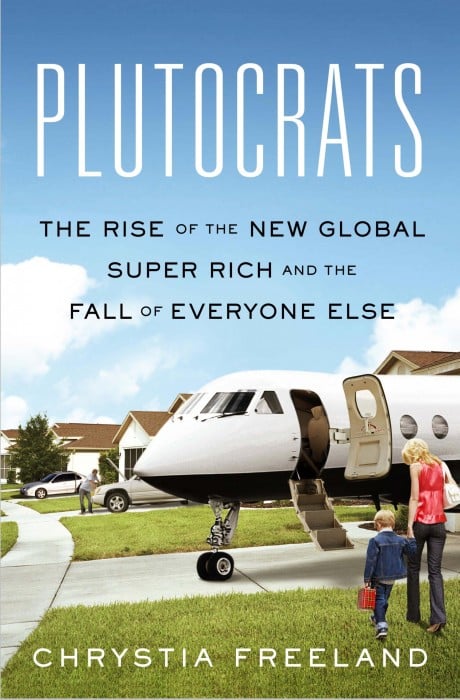 A key theme of the U.S. election is what to do about America’s ultra-rich. Republican presidential candidate and former hedge fund manager Mitt Romney calls them job creators who deserve tax breaks while President Barack Obama views them as comfortable billionaires who should pay tax at the same rate as the country’s struggling middle class. It’s this widening gulf between the richest “one per cent”—or, more accurately, the richest 0.01 per cent (whose wealth is growing faster than anyone else’s)—and the rest of society that Chrystia Freeland, editor of Thomson Reuters Digital, explores in her portrait of the world’s “plutocrats.”

Referring to the rich, F. Scott Fitzgerald memorably said, “They are different from you and me,” but Freeland argues that today’s ultra-wealthy occupy a whole new stratosphere. That’s because of how they got there: taking advantage of a once-in-a-lifetime opportunity presented by the twin forces of globalization and technology. Examples range from Mexico’s Carlos Slim and any number of Russian oligarchs to Microsoft’s Bill Gates. “Today’s plutocrats are modern-day robber barons, the beneficiaries of an era of extreme economic change,” Freeland writes.

Freeland’s book is at its strongest providing a window into the thinking of this new class. She claims that, unlike past generations, today’s ultra-wealthy are true global citizens and have far more in common with each other than with their own countrymen. They also work for a living and, as a result, firmly believe they deserve their success. They were not “born rich.” This mindset helps explain why many plutocrats are skeptical of government attempts to redistribute wealth and have no qualms backing incredibly self-serving policies. Though such lobbying is usually cloaked in the garb of being “pro-capitalism,” Freeland argues many plutocrats honestly believe that what’s best for them and their companies is also best for everyone else. It’s also a belief that gets reinforced by politicians who inevitably look up to the plutocrats and aspire to one day join their ranks—if they’re not there already.