'It’s stories we’re telling ourselves. They may be made up or they may be true, but the best fictions often feel true.' 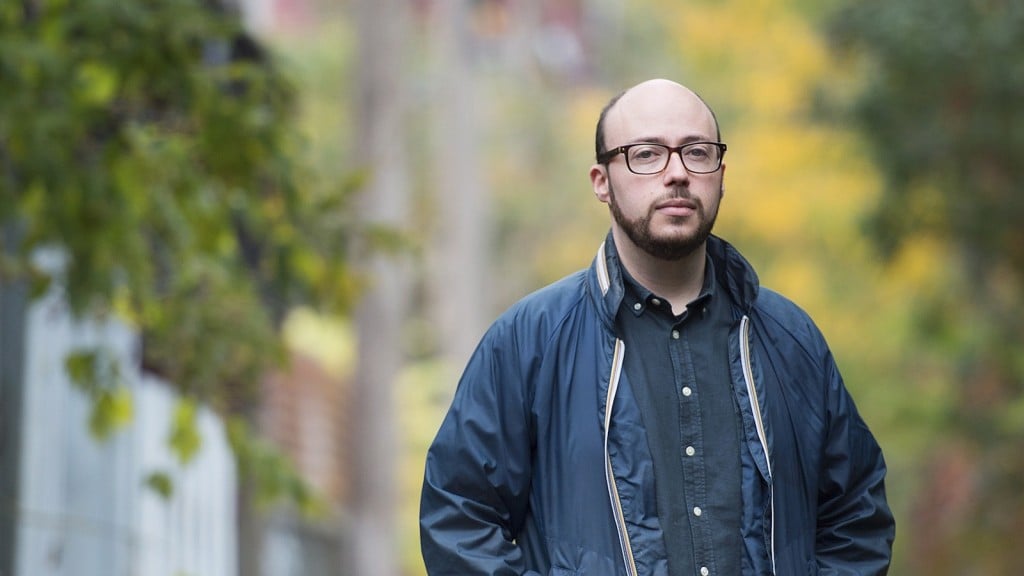 Sean Michaels won the 2014 Giller Prize for his debut novel, Us Conductors.

Most music writers aim for poetry in their prose; most, if not all, fail. Sean Michaels, on the other hand, is perhaps the only music writer from whom I would expect an exquisitely poetic novel. He and his comrades at the now-ancient MP3 blog Said the Gramophone use original short fiction, fanciful prose, poetry and sometimes just illustrations to accompany the music they’re excited to share with us. Not surprising, then, that Michaels has written a novel about music. But it’s not a thinly veiled autobiography about getting your heart broken by some girl who didn’t like your mixtape. Far, far from it.

Instead, Us Conductors takes as a template the very real, very strange life of Leon Theremin, inventor of the world’s first electronic instrument, and uses it to explore how a work of creation—a song, a novel, an invention—can be subject to the whims of history and circumstance, searching for an audience. Most important, it examines how all acts of creation are, in essence, unrequited love, and how the lies we tell ourselves can be what save us in the end. If that weren’t enough, Michaels’s tale takes place amidst the shifting sands of the early 20th century—political, technological, philosophical—that comprise a period of momentous, turbulent change.

I first tried to read the book when it came out in April. I failed. I had seen the excellent 1994 documentary Theremin; I felt I already knew the strange-but-true story of Leon Theremin. I have a problem with historical fiction based on real people; I had a similar struggle with Ann-Marie MacDonald’s The Way the Crow Flies, about the Steven Truscott case (is this part true? is this part made up?). I recognized that Michaels was a great writer successfully transitioning into novels, but I didn’t feel I could dive into this particular book.

But whatever—my loss. Because, when I decided to get over my hang-ups and came back to it this fall, I was completely enchanted. Yes, the story is fascinating, but the real appeal of the book is Michaels’s poetic economy, his beautiful language and his effortless evocation of larger philosophical questions into his narrative. It’s a thoroughly satisfying novel, and I’m happy that the Giller nod means that it will find an audience outside of music fans (because it’s about so much more than that) and first-fiction followers (because it’s much more accomplished than that).

Q: You set yourself a modest goal: choosing, as the protagonist of your first novel, a man whose story spans the history of the first half of the 20th century: revolution, freedom, slavery, innovation, the Cold War, racial relations, Soviet gulags, jazz, television, the dawn of electronic music.

It was a strange book to write, because the source material was almost too crammed with meat. It became a pressure: It was strange to leave stuff out because there was already too much meat. But it’s true. There was a bit of discomfort. I remember reading Ragtime, by E.L. Doctorow, several years before writing this, and that was the counterpoint: I loved that book, which took this period of time and showed the disparate forces intersecting. Because they were: the ’20s and ’30s were one of those exciting times when the arts and political and economic forces were really all at the same parties, in places in Europe and North America and Asia. So why not visit that spot?

Did you go on tangents you later stripped away?

Yes. There were even more montage party scenes. And in the historical reality of Theremin’s life, there was an American ambassador to Russia, W. Averell Harriman, on whom, late in the book, Theremin is eavesdropping in the American embassy in Moscow. In real life, Harriman was on Theremin’s boat during his first trip to America 20 years before. I learned that detail, and thought: arrrrgh. I could have a scene early in the book with a line like, “Perhaps we’ll meet again, Mr. Harriman.” But it would be too much. I wanted to write a short book that said less rather than more, as often as possible. That becomes a hard obstacle when there are so many faces, so many rooms.

It’s often said, of incredible events, that, “if they wrote it as fiction, no one would believe it.” And yet you chose to recast the strange, tumultuous life of Leon Theremin as fiction. Why?

Before I started to write the book, I was thinking about the experience of a lying, true love. It’s the weird sense of when people have relationships [with] a soulmate: They feel this connection, and so on. Some of us have experienced this and then seen it not work out. I was thinking of how it intersects with ideas of destiny and identity and love and beauty. Reading about Theremin and seeing the documentary about him, I was struck by the fact that all these true stories of his life gestured toward this unconsummated true love with Clara Rockmore. I fundamentally did not believe that story, that it was unconsummated true love. They were both married to other people. But could I explore that idea of a lying, true love in a number of ways through the lens of this story? Not just the universe telling you you’re meant to be with this person, but what happens if you’re in a place of great darkness, and the only thing getting you through is a kind of lie?

That happens to a lot of us: We have these delusions, these fictions, that tug us through life. Theremin’s story became an interesting way to present this. However, I don’t know what Lev felt for Clara, or vice versa. I knew what I wanted to explore was an idea of this kind of relationship, that I could never know the interior of these people’s lives. I wanted to throw out the window the idea that I was trying to tell the truth of their relationship. Rather, I was trying to use the skeleton of their relationship to explore a larger set of notions.

Even in a much shallower way—it’s funny to describe it as shallow—but the way we ascribe meaning to life. It’s stories we’re telling ourselves. They may be made up or they may be true, but the best fictions often feel true.

Yeah! Or, “I’m here for a reason,” or, “My kids mean something.” Okay, that’s pretty dark. Some people who have read Us Conductors see it as this weird portrait of a beautiful relationship that was meant to be. Yet, toward the end of the book, he finally tells the reader a conversation he had with Clara before he left America that makes it even clearer that their relationship was not ongoing.

I love the word “conductor”: of electricity, of creativity, of an orchestra of people interpreting the work of others. Why did you use it in the title?

The working title was “In which I seek the heart of Clara Rockmore, my one true love, finest theremin player the world will ever know.” That was the voice that was carrying through much of the writing. Then, when I decided to go with something shorter, I wanted to have a title that nodded to the way the book is addressed to someone. “You” and “we” are used throughout the book, and I wanted the title to nod to that tone, that era, kind of formal and regal. There’s something interesting to me that, in English, the word “conduct” means both to lead—and, in this case, the conductor has his hands in the air evocative of the hands of a thereminist—and to be led, to have something flow through you. They seem to be opposites, but the same word carries it, and I found that interesting.

Also: Is a thereminist someone who is making music, or channelling it? And we, as feeling human beings, are we making—well, not making—are we summoning love, are we creating or initiating love? Or is it something passing through us, out in the universe?

You’re nominated for a major Canadian literary prize. What, if anything, is Canadian about your book?

I was very surprised and very pleased, flattered, proud [to be nominated for the Giller]. Writing this book, I was conscious of how little of Canada was in the book. I love Montreal very much. Part of me wonders why I would ever write a book that doesn’t take place in Montreal; it’s full of things that I love and that I find mysterious and beautiful and hilarious. The book has really very few winks to Canada. Canadian literature has a reputation for being centred around events in Canadian cities, but it’s always had this real international breadth: Michael Ondaatje, Robertson Davies, Rohinton Mistry. There’s always been a large variety of works coming out of this country. I’m glad to be a tick in the register that communicates the wide diversity of art that’s come out of this country.

How hard has it been to find thereminists in every city on your book tour?

That’s been a crazy adventure in itself. Some cities were unexpectedly difficult. Toronto has far fewer thereminists than I’d guessed. I had to bring one in from Guelph [Jeff Bird]. In Portland, Oregon, I thought there would be one on every street corner, but they were very hard to find. Even Asheville, N.C., which is where [Robert] Moog built theremins, we had to bring one up from Atlanta. The Moog corporation said, “No, we don’t know any talented, gifted theremin players.” Then New York, as you would expect, has this nice community of great players.

There are a few different types of people who are attracted to the theremin. One of the types are these incredible interpreters who just stumbled across this instrument, for whom this is the way they can best communicate their secret hearts. They are the kind of musician I love the most, with a certain virtuosity that is surpassed by the spirit with which they play.

Some of them are real engineers. They really understand the electrical element of it: how the amplitude and voltage interact. There’s a much more engineer’s approach to the instrument that I don’t see with other musicians. A lot of really gifted ones are like carpenters or violinists, where their instrument is just a tool to communicate sound. There’s something refreshing about musicians who play with such elaborate contraptions that can still just see it as, “Oh, this is just a thing that I manipulate in order to make music.”