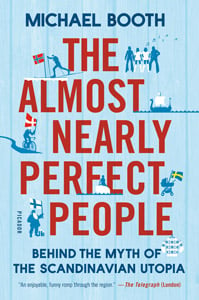 We’ve all read the studies extolling the Nordic countries’ education, wealth distribution and gender equality. Again and again, we’re told they’re a (somewhat snowy) paradise on Earth. And then something like the Copenhagen shooting happens, and everyone struggles to explain.

Booth, an English expat who lives with his Danish wife in the capital, wrote this book well before the Valentine’s Day attacks on a free-speech event and a synagogue. Still, despite its light tone and some very funny attempts to épater la bourgeoisie (Booth’s speaking to random people in Stockholm resembles Fight Club members’ efforts to pick fights with strangers), The Almost Nearly Perfect People engages with some dark ideas. Skeptical of the so-called “Nordic miracle” and of the cliché of a Scandinavian “superficial sameness,” Booth visits politicians, academics, writers and ordinary folk, asking whether prosperity can smother ambition, coziness can lead to laziness, and insularity can encourage a distrust of “outsiders.”

This last factor, he finds, is depressingly true: In Sweden, some immigrants are effectively segregated; in Norway, even after the 2011 massacre by “anti-Muslim terrorist” Anders Breivik, there is Islamophobia; and in Denmark, “even centrist parties routinely generalize negatively about immigrants and Muslims.” Booth takes a historical approach, arguing that the Danes started looking inward as their empire was pruned, skewering Finnish collaboration with the Nazis, and pinpointing the malevolent roots of the Swedish state’s “benign totalitarianism” in a government that sterilized non-Aryan women in 1934. These countries are hardly timeless paragons of liberal virtue. And with looming economic threats, from debt levels (in Iceland and Denmark) to unemployment (nearly a quarter of Swedes under 24) to a lack of economic diversification (in Nokia-reliant Finland and oil-rich Norway), issues of race and immigration aren’t likely to subside

Nonetheless, Booth holds out hope: He succeeds in humanizing a Nordic population that struggles with many of the same problems we do elsewhere, albeit from a more comfortable position. He portrays a resilient people who, by championing unity—as Danish PM Helle Thorning-Schmidt has done, rejecting Benjamin Netanyahu’s call for a Jewish exodus from Europe—could still show the world what equality means.