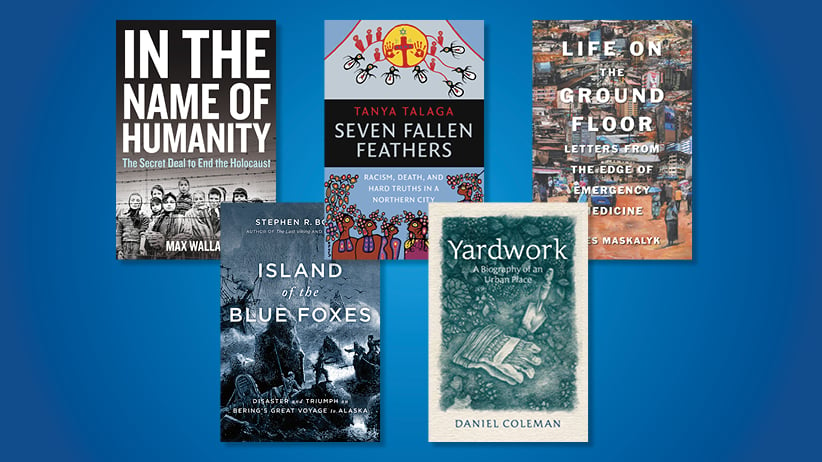 With today’s announcement of the RBC Taylor Prize shortlist, the second season for literary Canada’s non-fiction prizes entered the stretch run. Unlike the fiction prizes, all clustered in November, non-fiction awards peak twice: mid-fall for the Governor General’s and the Hilary Weston Writers’ Trust prizes; mid-winter for the B.C. Non-Fiction and the Taylor awards, the last to present its nominees for 2017.

They are a wide-ranging lot. The highly accomplished Taylor jurors would make numerous appearances in any set of Venn diagrams laying out CanLit’s deep state writing-academia-government nexus. Christine Elliott, a long-serving member of the Ontario legislature, is the province’s first patient ombudsman and the widow of Jim Flaherty, who was Canada’s finance minister; Anne Giardini, chancellor of Simon Fraser University, is the daughter of CanLit icon Carol Shields and a novelist herself; James Polk, writer, editor and publishing policy adviser in the Ontario government, was the longtime partner of revered literary editor Ellen Seligman, who died in 2016.

Their five choices include two intense historical works. Stephen Bown’s Island of the Blue Foxes: Disaster and Triumph on Bering’s Great Voyage to Alaska is a harrowing tale of an extraordinary scientific mission struggling with ferocious weather conditions and ravenous little foxes, while In the Name of Humanity by Max Wallace offers a startlingly new explanation of how the organized genocide of European Jews came to an end months before the Second World War itself. Then there is a third, more contemporary, history, Seven Fallen Feathers: Racism, Death, and Hard Truths in a Northern City. Tanya Talaga’s wrenching book looks at the lives of seven indigenous teens who died in Thunder Bay in the early 21st century, their fates almost as inexplicable in practical terms as they are morally indefensible.

MORE: Thunder Bay’s divided community is haunted by its “river of tears”

And there are two tightly focused memoirs that couldn’t be more different. Life on the Ground Floor: Letters From the Edge of Emergency Medicine by physician James Maskalyk derives essentially similar truths about the human condition from front-line experiences in a leading Toronto hospital and a spartan clinic in Ethiopia. Daniel Coleman’s Yardwork: A Biography of an Urban Place, on the other hand, stays close to home: there is no adrenaline rush, only a deep contemplation of the ground beneath Coleman’s feet, right outside his door.

In keeping with recent trends in literary prizes, the Taylor is newly enriched, albeit modestly, from $25,000 to $30,000. (In September, Rogers Communications doubled its contribution to the Writers’ Trust fiction prize from $25,000 to $50,000, while the Scotiabank Giller has stood at $100,000 since 2014.) But the Taylor proportionally boosted much more the money awarded runners-up, from $2,000 to $5,000. That’s another development that can be seen across all national prizes, one that reflects the ever more entrenched role awards play in the literary and publishing ecosystems, not just for the winners, but for their shortlisted peers.

With the Taylor announcement, it’s possible to see literary trends too. If the juries for the nation’s fiction prizes couldn’t see eye-to-eye in 2017—for the first time in two decades their shortlists didn’t have a single nominee in common—their non-fiction peers did share a few favourites. In November, Life on the Ground Floor won the $60,000 Hilary Weston prize, the most lucrative of the non-fiction awards, and Maskalyk’s beautifully written life-and-death story also made it on to the Taylor list. Carol Off’s soul-searching journalistic memoir, All We Leave Behind: A Reporter’s Journey Into the Lives of Others, actually appeared on three shortlists, missing only the Taylor. Likewise, Talaga’s Seven Feathers was also a finalist for the Hilary Weston, and remains a contender for the $40,000 B.C. prize, which names its winner on Feb. 1 and for the Taylor, which will close out literary award season with its Feb. 26 winner’s announcement.