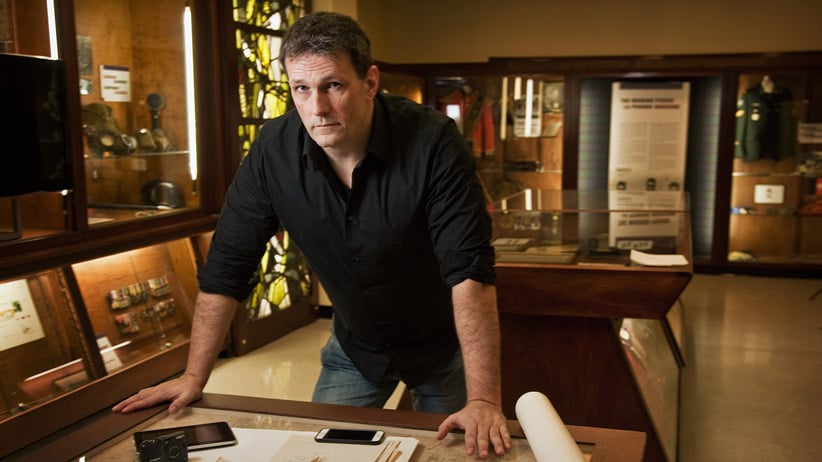 David O’Keefe has been working on the Aug. 19, 1942, Dieppe raid for two decades now, after a chance discovery in a British archive led him to a new understanding of the motives behind the worst single day in Canadian military history. A historian at Montreal’s Marianopolis College, O’Keefe sets out the story of the raid in his RBC Taylor Prize-nominated One Day in August. More than 5,000 Canadians went ashore in occupied France, O’Keefe argues, to provide cover for a special-ops unit seeking desperately needed Nazi cypher information. O’Keefe doesn’t dispute the importance of the motive, but still damns the incompetent planning that led to 907 Canadians dying within hours. “It may have been worth the risk,” he says, “but it wasn’t worth the cost.”

Here, as part of a series on the RBC Taylor Prize nominees, an exclusive excerpt of O’Keefe’s book, One Day In August:

Moving swiftly across the slick deck of the drab grey British destroyer HMS Fernie and up onto the bridge, a peacoat-clad Royal Naval Voluntary Reserve officer from Special Branch discarded his hand-rolled cigarette and pressed his binoculars to his eyes, adjusting the focus wheel to account for the darkness. In the distance, a series of fire-red mushroom-shaped explosions merged with the silver glow of bursting star shells and a carnival of red, orange and green tracer fire that darted back and forth just above the ink-black waterline. Then came the echo of staccato machine-gun and high-powered cannon fire, punctuated at irregular intervals by the whiplash crack of larger-calibre naval gunfire.

Straining to discern friend from foe, Commander Ian Fleming stood among a group of Allied journalists, broadcasters and photographers and American military observers expecting to witness the successful execution of the largest amphibious raid of the war to date, known as Operation Jubilee. But it was now clear to all aboard that something had gone wrong, and that the carefully synchronized raid, planned by Lord Louis Mountbatten’s Combined Operations Headquarters and involving a largely Canadian force, had begun 63 minutes prematurely.

Ian Fleming—who, a decade later, would write Casino Royale and launch his immortal James Bond—was listed innocuously on the ship’s manifest that day as a “guest.” For years, historians and biographers have asserted that the normally desk-bound member of the British Naval Intelligence Division played no role other than that of observer, and that Fleming’s natural desire for adventure, fused with an innate talent for bureaucratic machination, had landed him a prize seat on the Fernie, the backup command ship.

But this “guest” was in fact present in an official capacity—to oversee a critical intelligence portfolio, one of many he handled as personal assistant to the Director of Naval Intelligence, Rear Admiral John Godfrey. He was on board to witness the launch of a highly specialized commando unit that had been created specifically to carry out skilled and dangerous operations deemed of the greatest urgency and importance to the war effort. Fleming’s crack commando unit was set to make its debut under cover of this landmark raid on the coast of German-occupied France.

With the dawn, however, came the sober realization that the raid had gone off the rails in truly epic fashion. As the sky lightened, Fleming could see heavy German fire coming from the hotels that lined the beachfront and ribbons of flame flaring out from the towering clifftops. Below, the main beach—which had hosted generations of English vacationers, including Fleming himself, who had won and lost at the tables of its seaside casino before the war—had become a killing field for the assaulting troops. Catching quick glimpses of the scene through the swirling smokescreen, he could make out small black, motionless dots on the rocky beach where countless Canadian soldiers now lay dead and wounded, and scores of tanks and landing craft sitting abandoned or burning alongside them. Above the town hung an ominous black, acrid cloud, periodically pierced by German and British fighters swooping down to search out quarry, while rapid-firing anti-aircraft guns from both sides swept the sky with bright yellow and orange tracer fire.

Just 700 yards offshore, Fleming watched helplessly as his fledgling commando unit headed in their landing craft toward the deadly maelstrom. Tragically, what was about to occur was not simply the final act in the darkest day in Canadian military history but the beginning of one of the most controversial episodes of the entire Second World War. This one day in August—August 19, 1942—would haunt the survivors and leave the country struggling to understand why its young men had been sent to such a slaughter.

Excerpted from One Day in August Copyright © 2013 David O’Keefe. Permission granted by Random House of Canada Ltd. All rights reserved.