Remembering the First World War with satire, rather than solemnity 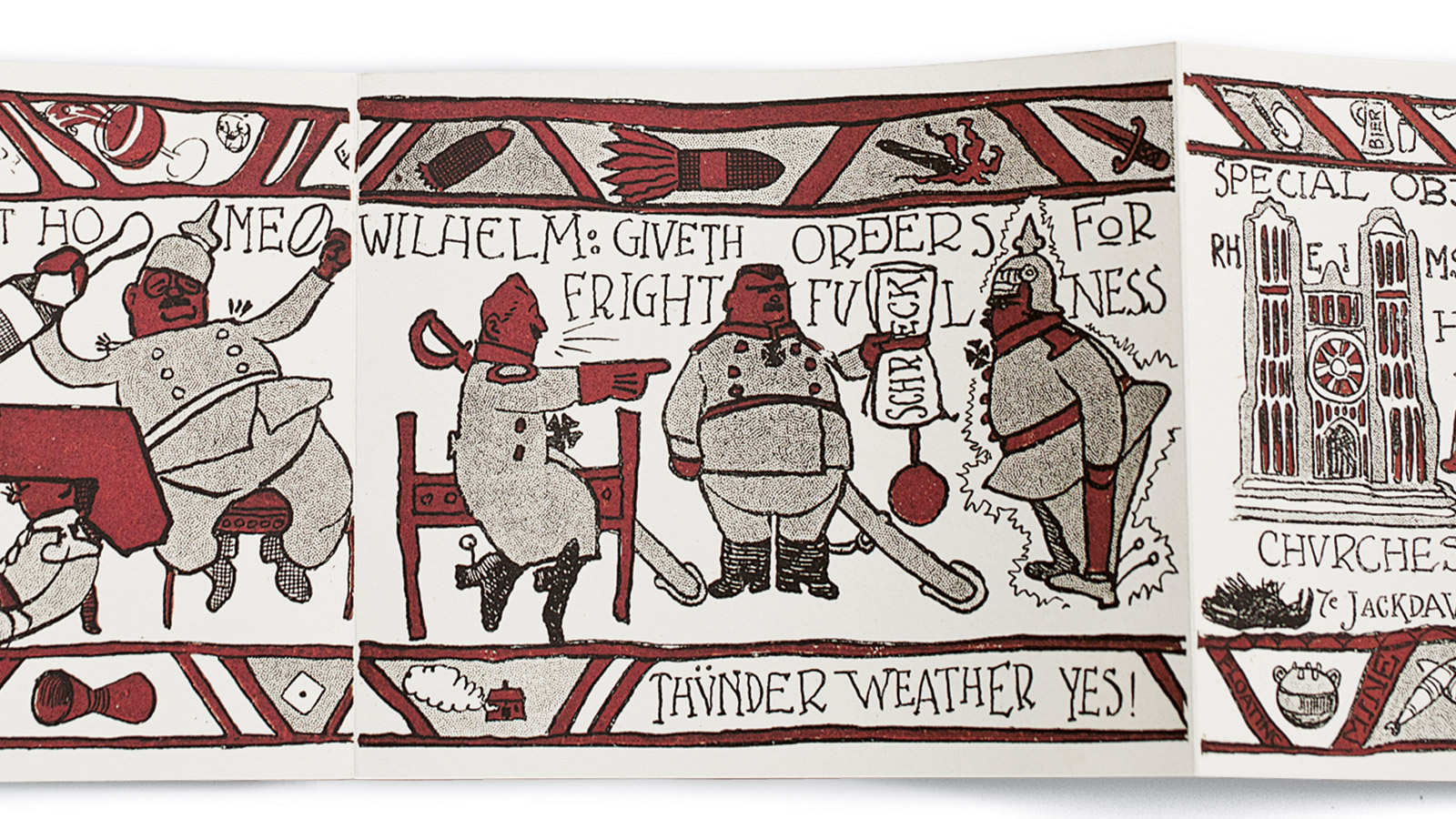 British publishers, says Samuel Fanous, of the august Bodleian Library at Oxford University, have been marking the centennial of the First World War with an outpouring of books, mostly of the “door-stopper, how-to-think-of-the war-now sort.” Fanous, a medievalist who doubles as head of publishing at the Bodleian, decided to go in a different direction, and “portray the war in its immediacy, a look into the raw reaction found in our primary sources.” And what sources they are. First opened to scholars in 1602, the Bodleian has been collecting books—11 million to date—and personal papers and mementos from Britons for centuries.

Whether repackaging old material—Secrets in a Dead Fish draws on postwar spy memoirs deposited in the library—or issuing entirely new tomes—The Huns Have Got My Gramophone! examines Great War-era advertising—Bodleian curators knew just what they had on hand. Except, curiously enough, in the case of the jewel among their centennial titles, Ye Berlyn Tapestry—that one, Britain’s one-time enemy had to tell them about. “We were arranging an exchange of material with a German archive for a joint exhibition,” Fanous recalls, when the Germans mentioned John Hassall’s satirical 1915 take on Kaiser Wilhelm’s invasion of Belgium the previous summer. “They had their own copy and found it very humorous. We were sure we’d have one.” They did.

Hassall was an illustrator and pioneering ad man. He wasn’t even employed by the government, Fanous says, when he responded in disgust to an official report on German atrocities in Belgium. Drawing on the iconic British representation of a foreign invasion—the 11th-century Bayeux Tapestry depicting the Norman conquest of England—Hassall mocked the Germans down to size.

Over 30 panels folded concertina-style—they stretch across more than five metres when fully extended—rendered with a limited palette of gray, black and brick-red, Hassall’s fat Prussians tear up treaties, loot cities, fire on hospitals, march women and children in front of their armies and create their poison gas by consuming vast quantities of Limburger cheese and sauerkraut, before being blocked by “ye [British] bulldog and ye Frenchman.” At one point, the Kaiser specifically orders “frightfulness,” meaning what today would be called war crimes.

It’s a remarkable piece of pop art, “highly sophisticated,” says Fanous, “and very British.” It reminds him of Noel Coward’s famous song of the Second World War, Don’t Let’s Be Beastly to the Germans, with its refrain, “Try to bring out their latent sense of fun / Let’s give them full air parity / And treat the rats with charity / But don’t let’s be beastly to the Hun.” Hassall’s mockery doesn’t simply make for more effective propaganda than claiming the moral high ground, the librarian says, it also “unwittingly reveals Britons’ idea of themselves” at the time, as a nation opposed to wreaking “frightfulness” on tiny neutrals, and as a people happily lacking an exaggerated sense of themselves.

Other eminent British institutions have been mining the obscure corners of their collections too. The Imperial War Museum offers Posters of the First World War, while the British Library has released Wartime Nursery Rhymes. The latter, which includes a version of “Jack and Jill” with the lines “Bang went the gun / Down went the Hun,” is as whimsical as the Tapestry and even more informative of contemporary attitudes—in its case, of what was judged suitable for children to learn.

For sheer historical evocativeness, though, the Bodleian has the cream of the crop. The ads in The Huns Have Got My Gramophone!—including ones for “anti-barbed wire” gloves and lighter gramophones more portable than the older models during a hasty retreat—are overwhelmingly directed at officers, or rather, their worried families back home. Officers were still a “distinct social class,” Fanous notes, and one that did not expect the government to provide every useful trench-survival item—at least not for them. They add up to another of Fanous’s glimpses into “immediacy” and self-image: a nation outraged, resolute and class-riven.