Review: Return of the Thin Man 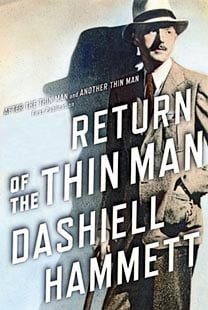 By all accounts Dashiell Hammett wasn’t an easy guy to love: ask his wife, lovers such as Lillian Hellman, or senator Joe McCarthy’s witch hunters. But, oh, that man could write. Drawing on his time as a Pinkerton detective, he crafted some of the most memorable hard-boiled characters of the 1930s: the Continental Op of the bloody marvellous Red Harvest, Sam Spade of the Maltese Falcon (brilliantly interpreted by Humphrey Bogart), and the urbane and outrageous Nick and Nora Charles of The Thin Man, his last and best-selling novel.

It was Nick and Nora’s seamless blend of crime, comedy and cocktails that cemented his place into the big-money world of Hollywood screenwriting. When Thin Man proved the surprise hit of 1934—the chemistry of actors William Powell and Myrna Loy fuelled by Hammett’s snappy dialogue—MGM yoked him into a $2,000-a-week contract to continue the franchise.

Between binge-drinking and womanizing, he cranked out two novellas released for the first time in this book: After the Thin Man in 1935 and Another Thin Man in 1938. Along the way a cranky and alcoholic Hammett ulcerated more than a few studio executives. Louis B. Mayer, as the introduction notes, chafed at his “irregular habits.” Both tales, while clearly written to be adapted to the screen, are a wonderful find, their back stories fleshed out in notes by Hammett biographer Richard Layman and Hammett’s granddaughter, Julie M. Rivett.

Fans of the movies will recognize scenes and dialogue lifted whole by the screenwriters, as well as the diversions—some caused by skittish censors alarmed by too much joyful drinking and playful innuendo. Yet it was exactly that which appealed to Depression-era audiences. And perhaps to Hammett, too. Nick and Nora were the fantasy he never achieved: a brilliant marriage, glittering good times, cocktails without consequences.