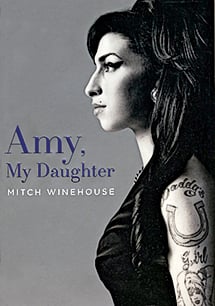 In March 2008, Amy Winehouse told her dad she wanted to have children. Given her drug abuse, he told her, this was both unlikely (she’d stopped menstruating) and unfair (her baby might be born addicted). It was the first time Mitch felt he’d broken through to his daughter, and believes it was “the beginning of the end of the drugs.” (He maintains Winehouse did kick narcotics, though not alcohol.)

So much about Winehouse was extreme—her talent, her style, her self-destructiveness—it is jarring to discover she had the most ordinary ambition of all: to be a mom. Even her father admits he was surprised. Early in the book, he describes Winehouse’s excitement at finding old photographs of herself and her brother, Alex, and remembers thinking his famous daughter was “just a normal girl who loves her family.” But this image is scarce. Mostly, Mitch’s account is one of chaos, a never-ending loop of withdrawal and relapse: Amy sobers up enough to perform brilliantly at a birthday concert for Nelson Mandela, then has heroin delivered to her hospital room the very next day; she swears off alcohol in the morning, then gets up in the night and polishes off a bottle of wine. It’s a story both dizzying and monotonous, much like that of any family dealing with addiction, save for the money and notoriety.

Still, every so often, Mitch offers a glimpse of Winehouse’s creative genius. He points to a lyric in a song on her first record, Frank, that conjures a moment, years earlier, when Amy watched Mitch press all the buzzers at her grandmother’s apartment building. “Amy was one of life’s great observers,” he writes. The two shared many things—a love of jazz, a happy-go-lucky spirit, a sly sense of humour. Mitch laughed when Amy singled him out at a performance as she cheekily sang “My daddy thinks I’m fine” from her hit Rehab. He despaired at hearing the same line through an open window following her death in July 2011. “Amy’s everywhere I go,” he writes. “But she’s not here.”