REVIEW: Conquered Into Liberty: Two Centuries of Battles Along the Great Warpath that Made the American Way of War

Book by Eliot A. Cohen 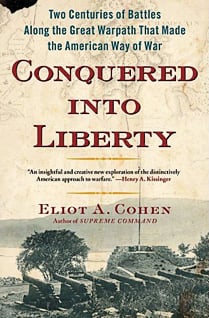 Canadians don’t tend to think of themselves as they’re portrayed by Cohen, a prominent American academic and former high-ranking Defense Department official. It is no surprise, then, that Conquered has stirred considerable buzz here, primarily for the author’s intriguing declaration that his countrymen’s distinctive way of waging war was forged in see-saw combat with “our most enduring and effective enemy of all: Canada.” Not that Cohen can’t back it up, at least in part. The thesis may require taking the present-day border and labelling as Canadian anyone who ever lived north of it—and fired a flintlock or swung a tomahawk at anyone living south of it—but the struggle along the Great Warpath was one of the deciding elements in the history of North America.

Approximately 300 km wide, an axis with Montreal at one end and New York at the other, the warpath had always been a natural water-transport route for hostile tribes and later for warring Europeans. The stakes were high: long-term control of the entire axis would have separated New England from the southern colonies, fatally weakening the nascent U.S., or ensured that there would be only one nation north of the Rio Grande.

As for the American way of war, Cohen points to the special-ops frontiersmen named Rogers’ Rangers after founder Robert Rogers. The U.S. Army Rangers still claim direct descent from them. But so also do the Canadian Forces’ Queen’s York Rangers, for Rogers remained loyal to the Crown during the American Revolution—showing the slippery terms involved in Cohen’s Canada-versus-America narrative. He’s on surer ground with his title. “You have been conquered into liberty,” ran the opening line of the propaganda sheet American revolutionary invaders took to Quebec in 1775. The Québécois then, much like the Iraqis now, were having none of it, but that American mix of idealism and realpolitik—conquest-borne freedom—has marked U.S. war policy ever since.

FILED UNDER: Conquered Into Liberty: Two Centuries of Battles Along the Great Warpath that Made the American Way of War Eliot A. Cohen