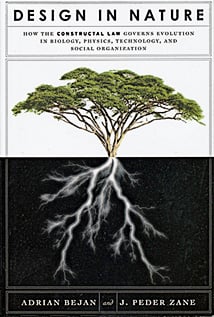 Believers of intelligent design are fond of holding up the recurring patterns in nature—forked, tree-like structures shared by river deltas, lightning bolts and even the air passages of our lungs—as evidence of a creator. Instead, Adrian Bejan, a professor of mechanical engineering at Duke University, attributes this to what he calls the constructal law: “a single law of physics [that] shapes the design of all around us,” he writes in his new book, Design in Nature, with J. Peder Zane, a journalism professor at St. Augustine’s College.

According to the constructal law, everything that moves—whether living or inanimate—is a flow system, evolving over time to facilitate movement. A lightning bolt, they note, is a flow system to shoot electricity from a cloud. A river basin moves water toward the river mouth. Our lungs, blood vessels, and neurons pump currents through our bodies. This tree-like design doesn’t just occur in nature; we see it everywhere, from highway systems to corporate structures. “The engineered world we have built so that we can move more easily does not copy the natural design,” they write, “it is a manifestation of it.”

Bejan and Zane use the constructal law to discuss all sorts of things, from ideal airport design to why athletes manage to keep breaking records year after year. Like other flow systems, animals, they explain, have evolved over time to move their mass more easily over distance; as people evolve to become “bigger, taller and more slender,” they write, “world records must fall.” At the 2008 Beijing Olympics, six-foot-five Jamaican sprinter Usain Bolt and six-foot-four American swimmer Michael Phelps went on to record victories, as the constructal law predicted.

Bejan and Zane’s book, filled with fascinating observations and brainteasers, is gracefully written. The constructal law “provides scientific evidence for the soaring sense of oneness we feel when we walk in the woods,” they write. “The ground, the trees, the air, and our own selves are indeed connected.”