REVIEW: Double cross: the true story of the d-day spies 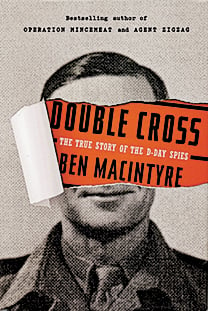 Though he’s not a novelist, Macintyre is one of the best spy-story writers around, someone who can weave a suspenseful narrative out of facts already on the public record. By the end of Double Cross he actually manages to make readers worry that the June 6, 1944, Normandy landings might fail. By 1942, a British counter-intelligence group, the punningly named Twenty Committee (its name in Roman numerals—XX—forming a double cross), was in control of every German spy in the United Kingdom. The committee launched a plan in 1944 to use those double agents—along with others who had always been on the Allied side—to mislead the Germans as to the place and timing of the invasion of France, and thus thin the defensive forces arrayed against those storming the beaches.

In an account redolent with ironies, Macintyre concentrates on five of the agents. There was the Spaniard Juan Pujol Garcia, a failed chicken farmer (rather like SS head Heinrich Himmler); Serbian womanizer Dusko Popov; Elvira de la Fuente Chaudoir, a bisexual Peruvian party girl; Polish patriot Roman Czerniawski; and a Frenchwoman of Russian descent, Lily Sergeyev, so devoted to Babs, her terrier-poodle cross, that she almost gave herself up to the Nazis out of rage after the British accidentally killed her dog.

Why either the British (who knew the agents’ frailties) or the race-obsessed Germans (who knew that none of them had ethnic or ideological ties to the Axis cause) believed anything any of them reported is beyond mysterious. But in the end the Allied faith was validated. No one leaked a word, at least not to the Nazis: in a final irony, one of the British XXers, Soviet spy Anthony Blunt, relayed every detail straight to Stalin. Luckily, Moscow kept a lid on the truth too. In a war of the big battalions—200,000 troops invaded Europe that day—the double-cross agents seem not much more than a sideshow. But what a story.