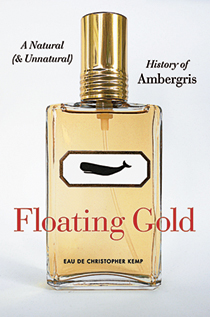 Everything about ambergris—hardened sperm whale dung that unpredictably washes up on shore—is as alluringly mysterious as the perfumes it fuels. Solid information is near impossible to pin down, from the unknown genius who centuries ago first realized that this stuff is just what’s needed to allow more pleasant scents to linger on the skin for hours, to those who gather and sell ambergris to its end users. The finest grade goes for up to $20,000 a kilo, and the buyers are not necessarily perfumers: during the tense Camp David negotiations of 1978, Egyptian president Anwar Sadat’s astrologer distributed pieces to the Arab negotiators to dissolve in their tea, in order to bolster their stamina. Ambergris is the kind of singularity—in nature and in human affairs—that cries out for investigation by an obsessed scientist who can write well. In Kemp, the world’s most lusted-after poop has found its man.

Kemp is an American microbiologist, not a cetologist, and he had hardly heard of ambergris before a suspected lump of it washed up on a nearby beach while he was spending a year in New Zealand. Kemp watched in amazement as locals jostled to divvy up what turned out to be 500 kg of worthless lard, rather than $10-million worth of whale feces, but he was even more astonished to learn how little even experts know.

He meets collectors, who speak of tense standoffs and occasional violent clashes on lonely beaches, and scientists unsure if ambergris kills the sperm whales who make it (via intestinal rupture). The perfume critic for the New York Times tells Kemp perfume-makers don’t use it any more. But independent perfumers—the sort who provide clients with half-ounce bespoke scents for $1,000 or more—show him their supplies, and French ambergris trader Bernard Perrin says his clients include Chanel. Perrin also sells to buyers in Singapore. What they want with it, he has no idea. Perhaps it goes in their tea or, like King Charles II, they sprinkle it on their scrambled eggs.