REVIEW: Former people: the final days of the Russian aristocracy 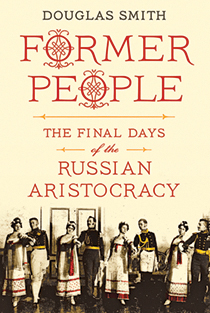 At the beginning of the Russian Revolution, there were nearly two million nobles in the nation. Some were the sybaritic aristocracy in Czar Nicholas’s court; most were in the educated elite— intellectuals, doctors, bureaucrats and historians. By the Second World War, only a few thousand were left in Russia, eking out an existence at the fringes of society. Officially classified as “former people,” their stories were forgotten. Now, for the first time, Douglas Smith—through a gripping saga focused on two prominent families, the Sheremetevs and Golitsyns—tells how an entire class was destroyed. Smith tracked down and interviewed survivors, pored through the scattered families’ long-hidden letters and memoirs and combed state archives. In the process, he turned what could have been a depressing litany of horrors into an engrossing book.

As chaos engulfed Russia, palaces and estates were looted and burned, possessions seized and often destroyed. Noble families were torn apart—some fled, others stayed, determined to adjust to the new reality. Remarkably, the Sheremetevs continued to live in their opulent Moscow residence. At a ball held there in 1920, Yelena Sheremetev and Vladimir Golitsyn fell in love. But their nuptial feast of fish and cabbage pies showed how much had changed, as did their new accommodations—a small apartment already crowded with more than a dozen relatives.

Even then, banishments to gulags and secret executions were destroying swaths of both families. The terror was often arbitrary. While Vladimir Golitsyn (uncle of the newlywed who died in a gulag in 1943) lived to his 90th year, his son, daughter and son-in-law were all executed in 1938. In the end virtually none of the Sheremetev family survived. The Golitsyns were luckier, if only because their clan was larger. Even so, Yelena estimated that 300 of her relatives were killed. Before she died in 1992, she told her grandson, Nikolay, that while she forgave the Bolsheviks long ago, she never forgot.