REVIEW: Gabby: A Story of Courage and Hope 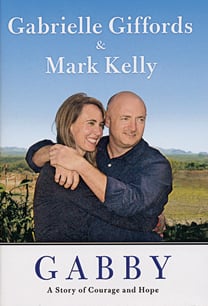 Giffords had just started an exciting new job in New York when her father summoned her home to Tucson, Ariz., to take over the family tire business. At 26, Giffords was already what her husband, Mark Kelly, describes as a “Renaissance woman.” In high school, she became an accomplished horsewoman. After college, she won a Fulbright scholarship and did research in a Mennonite community. Dealing tires had not been in her plans. But home she went, and with characteristic aplomb pulled her dad’s company out of debt, sold it to Goodyear and made sure the staff kept their jobs. In the process, she immersed herself in Tucson’s social and financial concerns and found her life’s true calling: to represent her hometown as an elected member of government.

Kelly’s loving and lively conjuring of the vivacious young Giffords offers a glimpse into the congresswoman’s resourcefulness. In January, she was targeted in a shooting rampage in which six people were slain. Luck saved her life—a bullet shattered a hand’s width of her skull but stopped short of killing her. Her amazing recovery—eight months after the attack, Giffords was back on Capitol Hill, voting to support the debt-ceiling bill—is a testament to her unique tenacity.

Giffords continues to suffer from aphasia, a brain injury-related condition that interferes with her verbal expression, and she speaks mainly in one- or two-word phrases. Annoyed when Kelly missed her 41st birthday to visit Richard Branson in London (though not when he went forward with the May launch of NASA’s second-last space-shuttle mission, on which he was commander), she told him: “I am mad at me!” Her non-verbal communication, however, has always revealed sharp attunement. Five days after the shooting, Kelly sat by his wife’s bedside, holding her hand. Suddenly, she pulled off his wedding ring, then moved it around her fingers. It was her ritual from when the two went out for dinner. Kelly was heartened. “She’s still Gabby,” he reminded himself. “She’s going to pull out of this.”

FILED UNDER: Gabby: A Story of Courage and Hope Gabrielle Giffords