REVIEW: George & Hilly: The Anatomy of a Relationship - Macleans.ca 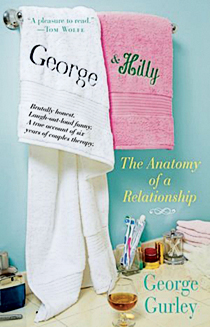 When he was the “nightlife” reporter for the New York Observer, Gurley wrote an avidly read column based on transcripts from the therapy sessions that he attended with his girlfriend, Hilly, to fix their seemingly doomed relationship. Dr. Harold Selman entered the couple’s lives to solve an impasse when they’d been together three years. Hilly, a fashion PR-type with a princess complex, was desperate for George to commit (or at least to buy her a big, sparkling ring). George, a charming man-boy approaching 40, was conflicted: terrified of becoming an Upper East Side “castrati” but also afraid of losing Hilly, the first woman to make him think a “real relationship” was possible.

Now George and Hilly’s privileged travails aired over their six years of therapy have been immortalized in a book—which will cheer those left hanging when Gurley’s column ended in 2008, and anyone else who delights in reading about screwed-up relationships being salvageable. Gurley, who’s locked in a Bright Lights, Big City ’80s time warp at the outset, is amusing and often insightful as he charts the couple’s seemingly frivolous First World problems: his bad-boy ways, Hilly’s Manolo Blahnik and nightly Sancerre habits, their tension-filled trip to Rome, and being forced to live together due to the astronomical New York real estate market.

Through it, they face mutual addictions—booze and debt—and share an evolving maturity and acceptance. Exactly why their therapy succeeds is never quite clear. Is it because the “abstracted and guarded” Dr. Selman is a genius? Or because the couple’s mutual frustration with his methods and attitude forged a common bond? Or maybe, as they both suspected, because they’re meant to be together? Whatever the reason, it worked: Hilly has her ring (if not her big wedding) and George has abandoned his boyish ways. “Boring became the new exciting,” Gurley writes—and fortunately is savvy enough to end it there.