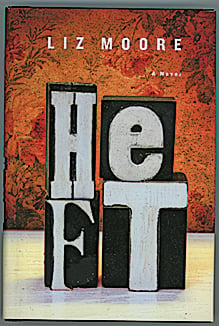 Arthur Opp is a morbidly obese recluse who dropped out of academia after a scandal, retreated to his Brooklyn home, and hasn’t been outside in 10 years. Kel Keller is a high school baseball star whose life seems perfect, but is really coming apart at the seams. Moore’s novel is narrated by these two characters, who are connected by Charlene, Kel’s mother and Arthur’s former student and friend.

Arthur’s peaceful if lonely existence is interrupted one day by a phone call from Charlene, with whom he’d lost touch. Charlene asks if he might tutor her son Kel to help him get into college, a request that makes Arthur deeply uncomfortable. Writing a letter to Charlene, he tells her: “The first thing you must know about me is that I am colossally fat,” thinking his deterioration after years alone in his house would shock her.

Charlene has problems of her own. Lonely and depressed, she’s become an alcoholic, and Kel bears the brunt of it. Spending his days juggling a teenager’s life and caring for his mother, Kel doesn’t want to go to college. He dreams of playing baseball for the Mets, his father’s favourite team, which he believes could bring the two of them closer together—his dad disappeared when he was a kid.

Moore’s style is light and engaging, if at times a bit too quirky. The best part of her book is Arthur, who comes to life as a sweet, vulnerable person whose voice is surprisingly relatable and wonderfully unique; Kel’s narration can sometimes seem flat by comparison. Even so, with Heft, Moore has managed to create a novel that’s uplifting despite its somewhat dark and heavy subject matter, just as its title suggests.