REVIEW: How It All Began 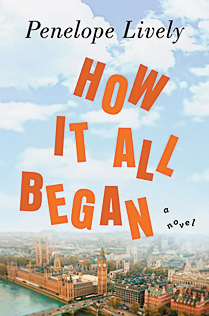 Charlotte, a retired English teacher, breaks her hip when she is knocked down by a mugger on her way home from the grocery store, and agrees to convalesce with Rose, her daughter, the personal assistant to Henry, which means Rose can’t accompany him to Manchester, where his lordship has been invited to speak, so Marion, his niece and an interior designer, agrees to go in Rose’s stead and leaves an affectionate voice mail to that effect on the cellphone of her lover Jeremy, which his wife, Stella, intercepts, resulting in Jeremy being summarily ejected from the marital home.

And that is just the beginning of How It All Began, Lively’s latest inquiry into the human heart. Here she explores how Charlotte’s fall sets in motion a cascade of unanticipated events for her characters. That one event leads to another, of course, is the bread and butter of storytelling (and life), but Lively wants to bring happenstance to the foreground, demanding that readers notice that chaos theory and the butterfly effect work their capricious magic even on everyday life.

Her characters’ stories are seamlessly interweaved as brief passages; the men and women are beautifully drawn, her rendering of contemporary London spot-on. This is Lively’s 17th novel for adults (she has written many more for children over her 40-year career). At this stage in her life (another great female British writer toiling late into old age), she seems to be drawn to her fictional contemporaries; certainly, her seventysomethings get the best parts.

Henry is a proper old dinosaur, a fusty relic of a lost England; once the confidant of prime ministers, even his area of scholarship, the 18th century, is unfashionable. But he perseveres, hilariously.

But it is Charlotte, at “77 moth-eaten years,” who is Lively’s proxy, given to meditations on memory and aging and the tripwire nature of events: “What we add up to, in the end, is a handful of images, apparently unrelated and unselected. Chaos, you would think, except that it is the chaos that makes each of us a person.”

FILED UNDER: book review bookmarked How it all began Penelope Lively