REVIEW: How To Win an Election: An Ancient Guide For Modern Politicians 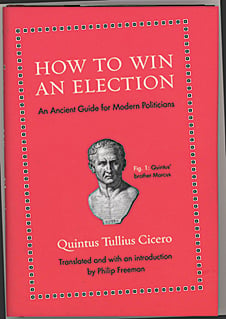 The more things change: aside from the fact that dealing with Iran was a perennial foreign policy issue for both groups, candidates for consul of the Roman republic (the highest office of state) 2,000 years ago and candidates for president of the American republic in 2012 faced radically different worlds. But when it comes to getting elected, campaign manager Quintus’s pragmatic advice for his famous brother Marcus could have been written by Karl Rove. (Small wonder George W. Bush’s electoral éminence grise provided How to Win an Election with a fulsome blurb.)

Don’t forget to remind voters, Quintus urges, in words Rove could have penned, “what scoundrels your opponents are and to smear these men at every opportunity with their crimes, sexual scandals and corruption.” Attack ads may well be, as many despairing observers consider, a curse of our jaded times, but there is nothing new about them. In his campaign of 64 BCE, Marcus had a bit of an advantage in that regard—some of his opponents really were criminals and scoundrels. One—Catiline, who later led an armed rebellion against the republic—was notorious for a litany of offences, from sexual involvement with his sister to personally decapitating a political enemy during one of Rome’s periodic violent upheavals.

The wretched quality of his rivals not only gave Marcus, Rome’s greatest orator but an outsider without family connections, a shot at victory, Quintus shrewdly observed, it also justified his own tactics. An election for consul—or, today, for president—does not turn on who is the ideal person for the job, but on who is the best of the available candidates. Marcus had to do what it took to keep Catiline out of office. To that end, his brother told him, assure the rich and powerful you support their privileges, and tell the common folk you’re on their side. Promise everyone whatever it takes: after the election, you can explain how circumstances beyond your control prevent you from carrying out those promises. Timeless wisdom indeed: Marcus won.