REVIEW: In Pursuit of the Unknown: 17 Equations That Changed the World 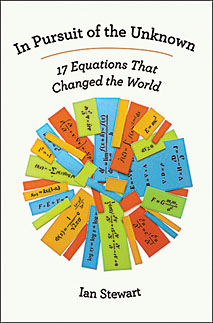 There are a few irksome things about this sure bestseller by the finest living math popularizer. In the chapter on information theory, Stewart (born in 1945) can’t resist taking a few Old Guy swipes at the Internet. (Apparently some of the stuff on there is untrue. And tomaters don’t taste nice and juicy like they used to!) His account of the financial crisis in the chapter on the Black-Scholes equation demands a stronger word than “oversimplified.” And of course he can’t resist cramming his precious chaos theory in there, pushing out dozens of candidates for the 17th slot. To mention just one objectionable result of this, Kepler’s laws of planetary motion become a mere footnote to Newton.

But let us re-emphasize: Stewart is the finest living math popularizer—a writer who can tackle eye-spraining mathematical topics approachably, and yet dazzle hard-core nerds with new and surprising information. It is hard not to get your money’s worth from him, and in a book like this he is at his best because of the very wide ground covered. If the humble logarithm was your Waterloo in school, Stewart’s chapter will give you a good chance of finally getting it. But when the march of history starts requiring equations that use the advanced calculus concept of the “partial derivative,” he takes a page to mount a brave attempt at a lay explanation and does not shy from showing the reader the eccentric curly “d” that signifies it.

This is noteworthy because mass-market publishers are famous for wanting to suppress anything that even looks like math. Stewart relates the tale of Stephen Hawking being told that every equation in A Brief History of Time would halve sales. If that rule is literally true, In Pursuit of the Unknown can expect to sell significantly less than one copy. But Stewart will find his audience. After all, a history of the human species told in equations probably does make more sense than one entirely lacking in them.