By David B. Dennis 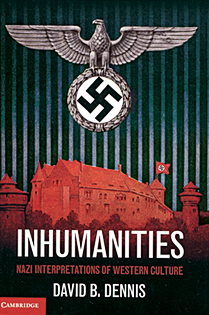 Most people are aware of what the Nazis hated: modern Western culture in general, especially ideals of religious and racial equality, and Jews, seen as the bacillus most responsible for spreading those toxic concepts, in particular. Less well understood is what the Hitlerites admired. The Nazis, or at least the true believers among them, did not see themselves as the murderous nihilists they were, but as defenders of “true”—meaning mystically transmitted by race and blood—Western art and culture. They didn’t just have their cultural enemies—Sigmund Freud, say, who combined Jewish ancestry with repulsive ideas—but their cultural heroes, too, most notably Hitler’s idol, anti-Semitic composer Richard Wagner.

Dennis, a historian at Loyola University in Chicago, examined two decades of cultural war as waged by Nazi theorists in their party’s official newspaper, the Völkischer Beobachter. A lot of what he found, were it the product of basement-dwelling Internet cranks rather than men about to unleash a tide of unparalleled barbarism, would be comic.

Take the case of Beethoven, whom—to Hitler’s disgust—the vast majority of Germans revered far more than Wagner. He was German, all right, but his father was a severe alcoholic and, according to Nazi social policy, should have been sterilized long before he begat Ludwig. Not to worry, Nazi Beethoven devotees, wrote Bonn professor Ludwig Schiedermair. If Johann van Beethoven “gladly drank wine and punch and once in a while offered girls little kisses in jest,” it was only because he was from the alcohol-loving Rhineland, where they understood that sort of zesty living. Foreigners, annoyingly enough, had to be admitted to the pantheon if enough Germans admired them. It helped, of course, if there was any record of anti-Semitic remarks on an outsider’s part: The Merchant of Venice, far more than Hamlet, brought Shakespeare into the fold.

In the end, though, what Dennis found was not comic at all: a long and depressingly successful campaign to convince Germans the Third Reich was the purification of Western civilization, not its antithesis.