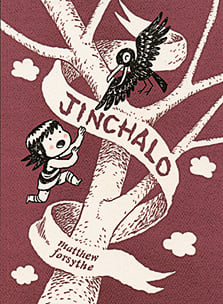 Forsythe is 35, lives in the Mile End section of Montreal and has a dog. Somehow from that workaday world he’s generated a fairy-tale land that draws together all his preoccupations as an illustrator, cartoonist and children’s author: Jinchalo, a wordless comic strip printed almost entirely in monochrome and set in a magic version of ancient Korea, begins with a magpie dressed in hat and tunic and armed with a walking stick, and ends with a terrifying metamorphosis that brings the story full circle. At bottom it is a poignant look at innocence versus the mayhem of experience.

The hero is Voguchi, a little girl who commits transgressions, disappoints her bent-backed granddad and tries, desperately, to make amends. Her adventures introduce her to a furry monster with a funny hat much too small for him, odd landlocked sea creatures with one eye, robots, lush market scenes where the produce stares back at you, and a mysterious shape-shifter who, once hatched from a strange, large egg, rules her life.

An award-winning cartoonist whose first children’s book, My Name is Elizabeth, was last year a New York Times Notable Book, Forsythe here creates a world as strange, intricate and as ineffably profound as those in animator Hayao Miyazaki’s films. But where Miyazaki borrows from the folklore of Japan and works in Japanese anime, Forsythe’s Jinchalo is a mutt of influences—from underground comics (Jinchalo is published by alternative comics powerhouse Drawn & Quarterly) to manga, Korean mythology and menacing demons out of Hieronymus Bosch.

Indeed, the book is every bit the shape-shifting trickster that little Voguchi’s nemesis turns out to be. Forsythe once taught English to kindergarten students in South Korea, and Jinchalo feels like nostalgia for a lost country, reimagined from a Montreal walk-up; he also toyed with becoming an ornithologist, and the characters of his bird world—the commanding magpies and seagulls in robes and tall hats—are like emissaries from a place one can never see again.