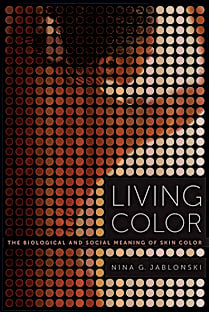 After centuries of racial—which is to say, skin-tone-based—slavery and its evil legacies, even the basic biology of human skin, which carries enormous health implications, has become a toxic topic. Anthropological racism up to the early 20th century was so deep-dyed that in the past 50 years most scholars have refused to go near what Jablonski calls a perfect example of “the complex interplay of biological and cultural influences that defines our species.” A Penn State anthropologist herself, Jablonski has crafted a lucid and precisely written book indeed. You can feel her weighing each word before setting it down.

As soon as we lost our ancestral fur, humans started darkening. But not for the reason popularly assumed. Yes, melanin does protect against skin cancer, but the latter rarely kills us in our reproductive years, when natural selection exerts its power. It cannot be why dark-skinned people were favoured by evolution in our ancestral African home. Scientists now point at the way melanin-rich skin protects folate in our blood. Folate deficiency is a proven cause of birth defects, meaning that a physical attribute that guards folate offers a huge evolutionary edge.

There are other long-posed questions to which the author provides the latest answers. Why do we lose, by natural selection, no more pigmentation than necessary? Inuit skin colour is an excellent “compromise between biology and culture”: their vitamin-D-rich diet mean they do not have to maximally “depigmentize” in order to collect their D from sunshine, and they can thus keep more cancer-preventing melanin than, say, Scandinavians. But most of Living Color is focused on how colour, the concept of race, and prejudice became entangled, and on the health effects now felt by dark-skinned people in the high latitudes and by light-skinned ones under a tropical sky. It’s time, Jablonski argues, that we start talking skin colour again.