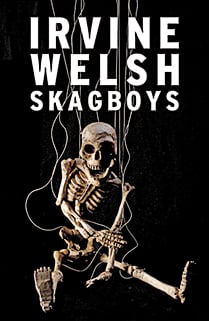 Welsh was 35 when his debut novel came out in 1993. The Edinburgh native had already worked as an electrician, a city worker and a property speculator. In the years since, he has done nothing but write more books, a tribute to the success of that first one, Trainspotting, a disconnected narrative about Scottish junkies and alcoholics—written in a sometimes impenetrable phonetic patois—that became an unlikely worldwide hit. Skagboys is the third Welsh novel to feature the characters introduced in that book. (A sequel, Porno, came out in 2003.) Set in the years immediately preceding Trainspotting, it tracks childhood friends Renton, Sick Boy, Spud and Begbie (and a bushel of others) in the early years of Thatcher’s Scotland, as unemployment soars and heroin first floods the streets of Leith, the working-class Edinburgh neighbourhood where the boys (and Welsh) grew up.

Fans of Trainspotting will find plenty to like here. Skagboys, like most of Welsh’s work, comes stuffed with sex, drugs, violence and black acts. (Sick Boy and Begbie are especially vile.) But Skagboys is also both more political and less urgent than Trainspotting was. Welsh goes some way to explain, if not excuse, the lives his characters live here. The book opens with a long set piece, narrated by Renton, about a strike-breaking police raid, and Thatcher’s war on the working class is a recurring theme. What’s lacking, however, is the giddy, anarchic chaos that made Trainspotting feel so vital on first read. The narrative in Skagboys always comes off a bit preordained (maybe that’s inevitable in a prequel). Still, it’s a dark, funny, sometimes sexy read, just not necessarily an essential one.