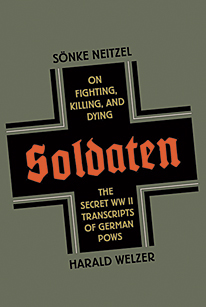 During the Second World War, in a POW camp north of London, a conversation between two German prisoners was secretly recorded. One soldier was telling another about his more pleasant memories of the U.S.S.R. “It’s beautiful country [around there]. Everywhere we saw women doing compulsory labour service. They were employed on road making; extraordinarily lovely girls. We simply pulled them into the armoured car, raped them and threw them out again. Did they curse!”

The transcript of that conversation, which startles more by its casualness than by revealing anything new about the nature of war, is only a tiny fraction of the material German historian Sönke Neitzel stumbled upon in British and American archives after 2001. He eventually found, and analyzed with social psychologist Harald Welzer, 150,000 pages of covertly recorded conversations between German soldiers, sailors and airmen. The Allies had done the bugging in hopes of gaining military intelligence. Nothing much ever came of that, but the transcripts are now historical gold: an uncensored picture of how ordinary German soldiers thought, acted and justified themselves to their comrades. The records destroy the postwar German myth of the “clean” Wehrmacht, innocent (on the whole) of the crimes of the brutal SS.

The men talk about their wives and about rape, brothels and STDs, about the enemy and their own leaders, about combat and atrocities. They had little to say about Nazi obsessions, and while they thought some of their duties—such as murdering the Reich’s enemies en masse—were nasty jobs, they didn’t shirk them either. A pilot talked of how he hadn’t liked bombing Polish villages at first but soon thought, “Hell, orders are orders, and by the fourth day I was enjoying it. It became our before-breakfast amusement.” All he regretted was killing horses: “I’ll be sorry for them to the last day.” The authors’ conclusion after years immersed in material that both fascinated and appalled them? Socializing men to extreme violence isn’t difficult; when the highest command is dedicated to genocide, it’s dead easy.