REVIEW: The Chemistry of Tears 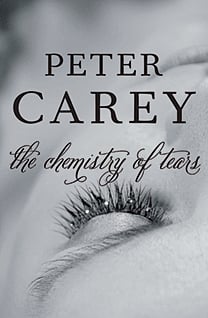 Carey’s new novel reads like a dream, and not just for its literary virtuosity. On the surface, it seems to be the story of a nerdy spinster with a secret life—and a torrid love affair. But as she copes with a heartbreaking loss in a most unconventional manner, the book’s deeper and more universal themes emerge: our love-hate relationship with technology, our inability to comprehend death, our see-sawing needs for intimacy and autonomy.

Not that Carey indulges in such psychobabble. He’s too busy doing a seamless job linking the narratives of unlikely soulmates Catherine Gehrig and Henry Brandling. Catherine lives in modern-day London and works as a curator at a museum with a “world-famous collection of clocks and watches, automata and other wind-up machines.” When she discovers that her married lover, Matthew, has dropped dead of a heart attack, Catherine is faced with the near impossible task of hiding her grief at work. (Matthew was also her colleague.) Then the department head sequesters her in a tightly guarded annex where a unique assignment awaits—the reconstruction of a massive automated duck.

It is thus that Catherine comes across Henry, via journals he kept some 150 years earlier, when he left his consumptive son and adulterous wife and set off for Germany to have the duck built in the hopes that it might “agitate” young Percy enough to keep him alive. The scheme is out of character—Henry is more timid than intrepid and has a limited imagination—but he is so desperate to save his son that he surrenders his project to a shady ensemble of characters who bombard him with mystical notions about science and fate.

Catherine similarly prefers fact to fancy—she once thought “clockmaking must still any turmoil in one’s breast.” But as she mourns Matthew, she finds herself horrified by machines—robots that keep autistic children company, tanks that explode in the sea, even the decaying human body. In the end, her only solace comes from a fellow skeptic of a former century and the brave and messy journey he takes to mend his own broken heart.