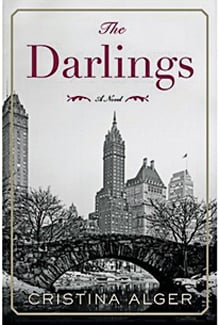 With unemployment rates and income inequality remaining at alarming highs, how can readers find literary sympathy with the so-called one per cent? In her sly, sophisticated debut novel, Alger does it by making one Upper East Side-based family vulnerable to a scheme that loses them hundreds of millions of dollars and imperils their generations-old perks, but which ultimately makes them realize they can make do on far less than they expected.

Alger clearly takes her inspiration for the plot device that drives The Darlings from the Bernard Madoff Ponzi scandal of 2008, recasting Madoff as Morty Reis, the Darling family’s trusted honorary uncle who parks his car near a city bridge, takes off his shoes and apparently jumps to his death. The shocking tragedy blows a hole through the Darlings’ entire existence: who among them knew that the outstanding performance of Reis’s investment firm—which drove more than 30 per cent of their business—was an utter fraud?

As the story gallops along, we get to know patriarch Carter, the self-made hedge fund man now on the brink; his steely, face-saving wife, Ines; younger daughter Lily, immersed in quasi-celebrity and a perfume business; pragmatic eldest daughter Merrill and her husband, Paul, a North Carolina boy yearning to fit in with the family but faced with a wrenching choice: save his own skin or sacrifice himself for the Darlings, who may be richer than Croesus, but who are tougher and less self-centred than they first appear.

Alger knows very well the world of which she writes: she was born and raised in Manhattan, the daughter of a hedge fund owner who died during the Sept. 11 attacks, and a former corporate lawyer. Her observations about the rich are pointed without being cruel. It is strange to say that catastrophes befalling the rich can be escapist, but Alger’s entertaining tale is just that—while also being a compulsively good read.