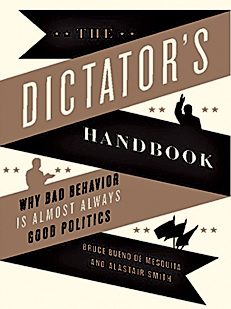 This book should come with a guarantee: “You’ll be wholeheartedly cynical about the political process in all its forms, or your money back!” In a brutally forthright work, the authors distill the process by which politicians gain and retain power. Their conclusion: be it tyranny or democracy or anything in between, it is favourable, even necessary, for politicians to be selfish, brutish and mean if they want to stay in power. “Politicians are all the same,” they write, and anyone “who thinks their leaders do what they ought to do—what’s best for their nation of subjects—ought to become an academic rather than enter political life.”

To the pair (who are, yes, academics), there are no such thing as despots, at least in the accepted sense of the word. Rather, the likes of Joseph Stalin and Saddam Hussein are beholden to the power brokers in their immediate circle. Successful despots keep this circle small, sublimated—but very well paid. They know that losing control of them means losing control of the purse strings and the men with guns. All of this might sound uncouth to your average Western democracy, but Bueno de Mesquita and Smith argue that what applies to despots also applies to democrats—the only difference being the democrats’ demise is the ballot box, not bullets.

But the ballot box is no panacea. Gerrymandering has essentially allowed politicians to rise to power thanks to small, highly motivated blocs of voters, while leaders who make noises about fixing the system find themselves abandoned by the “essentials” on Wall Street—and in their own cabinet. Those politicians who do good deeds do so because their hand is forced; South Africa’s F.W. de Klerk cut a deal with Nelson Mandela because his apartheid government ran out of money, not because he wanted to do away with the awful status quo. The authors are careful to illustrate a few of history’s bright points—Washington, Mandela, Nehru—but make a frightfully good argument by turning an old cliché on its ear. Power doesn’t corrupt. Rather, power inevitably attracts the corrupted.