Review: The Man in the Rockefeller Suit 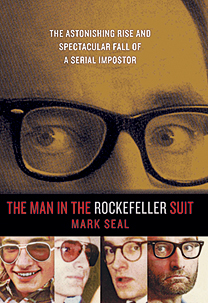 People often reinvent themselves. Some get a new haircut, others plastic surgery. But most people don’t change their name, family background and job history repeatedly over a 30-year period. But then Christian Karl Gerharts­reiter doesn’t fit into the category of “most people.” In The Man in the Rockefeller Suit, Mark Seal skilfully dissects this imposter’s lengthy run as Clark Rockefeller, a fictitious scion of the famous family. In Germany, Seal uncovers the roots of a modern-day chameleon. He learns of an eccentric teenager who wore business suits to school, read the classics and drove a hearse around town for fun. Gerhartsreiter had a knack for role-playing and dreamed of escaping to America.

In the U.S., Seal interviews everyone from Gerhartsreiter’s early billets in the 1970s to the wealthy Californians and Wall Street types he later manipulated. Seal listens incredulously as New Englanders recount their shock that Clark Rockefeller wasn’t the inspiration for Frasier’s Niles, amongst other things. Despite Seal’s sometimes overwhelming attention to detail, he keeps the narrative humming with examples of outrageous exploits. In 1992, visitors to Rockefeller’s New York apartment admired his fabulous art collection. That his place was furnished mostly with lawn furniture they chalked up to the old “Rockefeller eccentricity.”

Seal’s talent for dry humour is entertaining, but his take on this anti-hero’s humanity is also evident. After decades of lies, callousness and manipulation, Rockefeller makes a last-gasp effort to hold on to the one real relationship he has had. As it turns out, even an imposter needs a little bit of truth in life. For Clark Rockefeller, his attempt at legitimacy and redemption turned out to be his undoing.