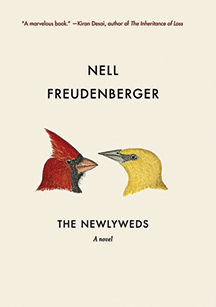 Some people believe that from the moment you board an airplane en route to a new life in a foreign country, you never quite belong anywhere ever again. Amina has a sense of this as she leaves Bangladesh for Rochester, N.Y., where she will marry George, an American man she met online. When Nasir, a close family friend, writes to Amina that he is trying to reconcile his idea of her in a different country—“past-Munni and present-Munni,” as he says, referring to her by her nickname—Amina is shocked at how perfectly he captures her own feelings. Indeed, she often wonders whether the two Munnis “would simply grow farther and farther apart, until one day they didn’t even recognize each other.”

While the upheaval of migration is at the heart of this story, it never feels as if the book is trying to “tackle” a social issue. Amina and George’s marriage is rich with the drama that makes or breaks all relationships. He counsels, she listens. He desires, she acquiesces. He betrays, she punishes. Initially, Amina portrays George as condescending and uptight, but as she gets to know him she begins to understand her husband’s vulnerabilities and to recognize her own contribution to the tension between them, particularly her campaign to bring her parents to America.

When Freudenberger published her first short story in the New Yorker in 2001, critics surmised that such a prestigious byline for a rookie could only be explained by Freudenberger’s youth, looks and privilege—plus the fact she was on staff at the magazine. But any doubt about her skill is officially snuffed with her second novel, beautifully written and brimming with intrigue (a love interest on either side who threatens to thwart the union), menace (a vengeful relative with a violent past) and humour: when Amina mentions the joyriding teens who vandalize mailboxes in her Rochester neighbourhood, her relatives are baffled that “people with cars” would commit such crimes. “Some postal fraud scheme?” they ask.