REVIEW: The Perfect Gentleman: A Muslim Boy Meets the West 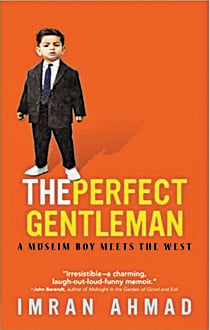 Ahmad was a Pakistani immigrant in the suburbs of London in the 1970s and 1980s. Predictably, the racism he encountered was wicked, yet he accomplishes a delightful feat with this memoir. He presents a hilarious tale where bigotry, wars, and religion play the straight man to his dry wit.

Ahmad’s survival skill is social assimilation, which begins with the cultivation of an English accent he describes as “perfect BBC.” Yet he is plagued by qualms about abandoning Islam for “vicarage garden party lukewarm Christianity.” Ahmad’s childhood pronouncements about Christianity (“There’s bad news about Jesus,” he reports of the Crucifixion) and Islam (“We make the Amish look like swingers”) are highly entertaining. Should Inuit be expected to fast for Ramadan, he wonders, considering their long days? When he finally gets an invitation for casual sex at university, he can’t figure out the logistics (“Where do I put my clothes?”). Ahmad survives three conversion attempts, deciding to stick with Islam after hearing a tape by the famous Canadian Muslim, Dr. Gary Miller. As a grad student with an Alfa Romeo and a microwave, he figures he can finally attract a girlfriend. “It didn’t go quite as expected,” is his comical refrain throughout.

This laugh-out-loud book has a deceptively simple structure, with each chapter representing a school year of his life, including summer vacation. It doesn’t feel like a literary crutch because it reflects Ahmad’s orderly, rational character. The complexity of his spiritual searching—and his desire for better cars—increases with each chapter. Funny stories about his Jaguar XJS and crushes on girls keep things light, but the book’s real value is in Ahmad’s explanation of misunderstandings between secular Westerners and Christian culture and the multi-faceted Muslim world. A feminist and a peacemaker, our “perfect gentleman” has this reader impatient for the sequel.