REVIEW: The Spanish holocaust: inquisition and extermination in twentieth-century Spain 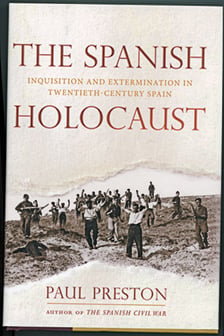 The Spanish Civil War (1936 to 1939), viciously fought within the country, was just as contentious in the outside world. The passions it invoked among foreign supporters of the Loyalists (the leftist Republican government) and those backing the Nationalists (the rightist rebel army officers who rose in rebellion) have cooled considerably in the seven decades since. But they have never been extinguished, as reactions to Preston’s magisterial summation of the war’s atrocities show. The death toll from the actual fighting—perhaps 200,000 soldiers—merely equalled the killings behind the front lines and after the war ended.

No one disputes that Francisco Franco’s quasi-fascist Nationalists killed more people—probably three times as many—than the Loyalists did. In part that resulted from the inexorable zero-sum logic of war: the Nationalists won and thus had the opportunity, greedily grasped, to kill their opponents afterwards. The bone of contention lies in the question of the scale and intentionality of the deaths suffered while the war still raged.

Preston by no means ignores the 50,000 victims of the Republican side, including the extreme violence visited on the Spanish church: two-thirds of the clergy in a single Catalan province (Lleida) were killed. But conservative commentators have reacted angrily to what one called The Spanish Holocaust’s allegiance to the “age-old perspective of the left” which excuses Republican atrocities as “hot-blooded and reactive,” while viewing the rightist killings as deliberate policy. There is some truth in the first part of that charge, but, equally, Preston’s research leaves no doubt about the extent, cruelty and, above all, deliberateness of Franco’s repression.