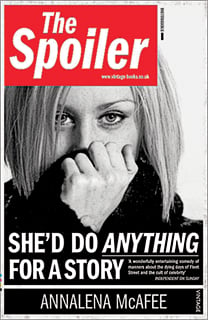 This debut novel concerns two women, both journalists, born 52 years apart. The younger, Tamara Sim, has been assigned by S*nday, The Monitor’s prestigious weekend magazine, to visit Honor Tait in her London home and write a 4,000-word profile on the retired war correspondent. This will be a stretch for Tamara, who usually works for The Monitor’s Psst! section writing photo captions, short blurbs on celebrity humiliations and, her specialty, lists (Losers and Boozers—Top Ten Rehab Write-Offs; Corkers to Porkers—From Fab to Flab; The Pits—Underarm Hair Horror of the Stars).

The imperious Honor has a list of her own, which includes Normandy, Buchenwald, Berlin, Algiers, Saigon, from that golden time when she was hailed as “the high IQ in a low-cut gown” (is it true she hired Lord Snowdon to take her passport picture?). Now pushing 80, she is irascible and difficult, a woman with a few regrets and several secrets. She has agreed to the interview solely to promote her second collection of writing, a follow-up to the enormously successful Truth, Typewriter and Toothbrush.

Suffice to say, the two women do not hit it off. But Tamara—superficial, easily distracted but extremely smart—presses on, reading Honor’s oeuvre (more stultifying than an obsolete train schedule) and dusting off her thesaurus for words (crepuscular, hermeneutic, chthonic) appropriate for a posh British magazine.

The Spoiler is set in 1997, moments before the 24/7 multi-platform tornado will sweep through the newspaper world and send circulations tumbling. It is a perfect moment to set such a satire (“dark hyper-comedy,” the jacket flap styles it) because Tamara and most of her colleagues think the Internet is a fad. McAfee’s humour really has bite. She delights (and not all that affectionately) in skewering London’s rivalrous newspaper culture and its lazy, deceitful, ill-informed inhabitants. Her depiction of the daily news meeting will sound a gong of truth to anyone who has had the misfortune to endure such a torment.

McAfee—who is the wife of the novelist Ian McEwan—spent three decades in the trenches and her zingy prose is note perfect. She has described herself as a “recovering journalist” and writing The Spoiler must have been the perfect 12th step.