REVIEW: Volcker: the triumph of persistence 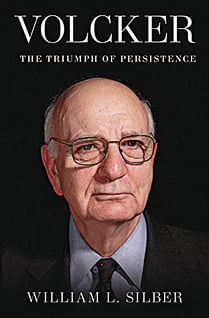 The saga of Paul Volcker, perhaps America’s lone unsullied statesman of finance and banking, unfolds in three heroic acts. First, he persuaded “Tricky Dick” Nixon to sever the link between the American dollar and gold in 1971, which ushered in the more sustainable (and, yes, often more unstable) world of floating currencies. Second, as chairman of the Federal Reserve, he stared down Jimmy Carter and Ronald Reagan to stop the devastation being wrought by inflation. Volcker was a Democrat, but that didn’t stop him from precipitously raising interest rates (and unemployment) six weeks before the 1980 elections. Sorry, Jimmy, but Volcker took orders from data, not politics. Reagan was happy to win the election with the inadvertent assist, but was rather less pleased when Volcker was similarly implacable for the next six years. Finally, in 2008, Volcker appeared at Barack Obama’s side to help rescue the financial system, with mixed results.

Silber, a professor at New York University, records what Volcker did, but also explains why, drawing on extensive research and 100 hours of interviews with Volcker. Silber does his best to make monetary policy debates seem as dramatic as they were consequential. This leads to some overwrought metaphors (the price of gold serves “as a carbon monoxide detector for inflationary expectations”), but mostly Silber succeeds in evaluating Volcker’s judgments over the years with clarity and without unnecessary reverence for a living legend.