REVIEW: When I was a child I read books 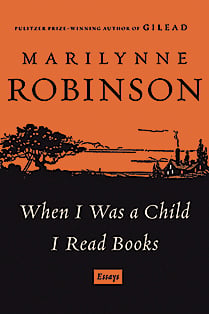 One of the most acclaimed, if least prolific (three novels in 28 years) novelists in America, Robinson, 68, is also a wonderful essayist. It is no criticism of her—quite the contrary—to note that she writes like someone from another era. And not just because her early schooling, like that of many people her age (or even younger), seems to more resemble something out of Dickens than contemporary children’s education. In the title essay of her new collection, Robinson writes that the bookshelves of northern Idaho, where she grew up, groaned with “old and thick and hard” tomes about such subjects as “Constantinople, the Cromwell revolution and chivalry,” books that allowed her to “experience that much underrated thing called deracination, the meditative, free appreciation of whatever comes under one’s eyes,” without concern over its relevance or whether it properly pertained to her tribe.

Robinson despises identity politics in general, and U.S. politics in particular, the work of two parties who agree, she writes, that capitalism has always been their country’s sole animating force and, even more dispiritingly, whether they’re for it or not, that capitalism is best understood as pure grasping materialism. “Modern discourse is not really comfortable with the word ‘soul,’ ” she notes, a loss not only to religion—Robinson is a Congregationalist—but in “literature, political thought and every humane pursuit.” For “call it self or call it soul,” everything moral that matters is felt, expressed or decided at the individual level, governed by our “unaccountable capacity for self-awareness.”

This high regard for the self as moral agent, and hence for every individual, Robinson considers the authentic American democratic tradition, and it informs everything in When I Was a Child, whether she’s criticizing the consequences of religious fundamentalism or eviscerating, with the politest of irony, books blaming the ills of Western civilization on its religious history. Throughout it all, Robinson—learned, humane and unfailingly civil—is a pleasure to read.

FILED UNDER: book review bookmarked Marilynne Robinson When I was a child I read books