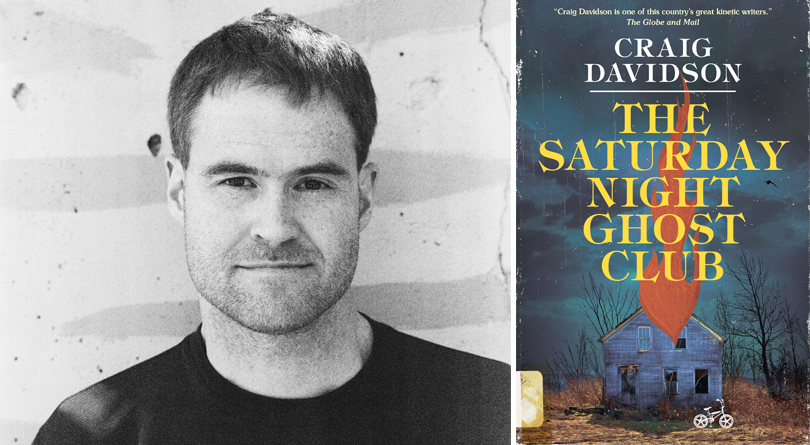 Craig Davidson is nominated for the Rogers Writers’ Trust Fiction Prize for his novel The Saturday Night Ghost Club, cited by the prize jury as a “viscerally exciting and deeply thoughtful” tale that cycles between a neurologist’s contemplative adult life and his lonely childhood. The winner will be announced at the Writers’ Trust Awards ceremony in Toronto on November 7. The winner receives $50,000. Each nominee receives $5,000. During the weeks leading up to the event, Maclean’s will publish an excerpt from each shortlisted writer, along with their answer to this one question: Who are you writing for, who is your imagined or intended reader? Here is Davidson’s response.

I think many writers hope to write books that provoke some manner of response—intellectual, emotional, be what it may—in as wide an array of readers as possible. That is, unless you’re targeting a specific audience or want to write cult books. Ultimately, for me, I’ve realized that my books aren’t for everyone … but then, taking perhaps J.K. Rowling aside, there’s no writer living or dead whose books are for everyone. So it’s about writing what I want to write, what feels most vital and honest to the way I see the world and wish to have it reflected in my work, and hoping that through luck or alchemy those books find the readers who are receptive to what they have to say.

Excerpted from The Saturday Night Ghost Club by Craig Davidson. Copyright © 2018 Craig Davidson. Published by Alfred A. Knopf Canada, a division of Penguin Random House Canada Limited. Reproduced by arrangement with the publisher. All rights reserved.

The oaks of the Niagara public links rose like broken fingers against the street-lit sky. The expen­sive hotels rose in columns of cold light to the south, and beyond them the falls were lit by green spot­lights, the water rushing endlessly, siphoning away those precious tourist dollars.

The local marine theme park, Land of Oceans, lay across the road. The parking lot was empty save for a lone camper van with Texas plates. We rode along the fence till we reached the staff entrance and hopped the locked gate, following a path behind the deer park.

We cut through the picnic area and over the train tracks, our reflections travelling the panes of glass of the Happy Manatee restaurant. The water of the killer whale pool lay black behind the two-inch-thick spectators’ glass. The sickle of a whale’s dorsal fin slit the water. Then the whale glided past, the white patch surrounding its eye glowing like a lantern in a cave.

Dove threw open the gate that led to a footbridge spanning the pool.

Her voice ascended on the second-to-last word, elongating it—I’m dooooo-ing it—as she skipped lightly across the bridge. Before my mind could catalogue the risks, which included but were not limited to trip­ping and falling into a pool containing two enormous unpredictable mammals, I was following her.

Imagine trying to hold the tail of a comet as it blazes across the heavens. It’s burning your hands, eating you up, but there’s no malice in it; a comet can’t possibly know or care about you. You will sacrifice all you are or ever will be for that comet because it suffuses every inch of your skin with a sweet itch you cannot scratch, and through its grace you discover velocities you never dreamt possible. You will love that comet, but part of that love—a percentage impossible to cali­brate—is tied to your inability to understand it. How can that comet burn as it does, pursue the trajectory it does? It confuses you, because the comet disguises itself as a human girl. But make no mistake, the girl contains fire to evaporate oceans, light to blind minor gods. If I could freeze her in the heartbeat where she skipped across the footbridge, carve her out of time and fix her in the firmament . . . in the deepest cham­bers of my heart, I know that nobody, not another soul on earth, will ever be as purely astonishing as Dove Yellowbird was in that moment.

My reflection quivered in the water under the bridge and then, miraculously, I was over. Dove danced across the show stage. A whale bobbed up at the pool’s edge, its head sleek as a ballistic torpedo.