Sex and death on a doomed search for enlightenment

A review of Scott Carney's A Death on Diamond Mountain 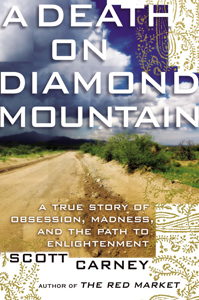 A Death on Diamond Mountain:

A true story of obsession, madness and the path to enlightenment

Ian Thorson came to prominence when he died in 2012 on a mountaintop spiritual retreat founded by Michael Roach and Christie McNally, and one of the stories this book attempts to tell is how that happened.

How did Thorson, from Roosevelt Island in New York City, come to die of dehydration in the Arizona cave he shared with McNally, who had an emergency beacon she did not use in time?

The book’s second subject is Buddhism in America and how it moved from hippies in dirty storefronts to yoga island retreats for the super-rich.

Thorson’s life begins with a pleasant-sounding childhood of summers spent surfing, continues with study at Stanford then veers off into that search for self and meaning that claims so many of the young and comfortable.

After travelling in India and Tibet, he returns to New York and meets the villainously named Roach, an American monk whose diamond- dealing success somehow makes his Buddhist teaching particularly convincing—one of the questions the book avoids is why mystical movements in America often promise wealth. Here’s another: Is believing your girlfriend to be a reincarnated goddess really so different from believing you only need positive thinking to overcome socially imposed obstacles?

Roach founds a remote spiritual retreat in Arizona and moves his followers away from traditional Tibetan Buddhism by emphasizing its more controlling aspects and having lots of unmonklike sex on long silent-meditation retreats.

In a touching chapter, Thorson’s parents try to extract their son. They fail, but a relationship, a child and a transatlantic move temporarily free him from what looks undeniably like a cult.

Unfortunately, he returns and ends up dating Roach’s ex-wife, McNally, with terrible consequences when they are expelled from the compound.

In Carney’s telling, Thorson’s mountainside death seems to be the consequence of McNally and Roach’s struggle for power, though Thorson emerges as a sometimes violent and troubled individual. His eventual fanaticism is especially chilling because it arrives through a tradition of peace, which the book may illuminate—for some. Carney’s sections on Buddhist history have the charming and unpredictable flow of a Wikipedia article, and they are well-suited for readers with limited time.